Armed Forces Day – 25th June 2016 – Greatest respect to all British and Commonwealth servicemen who served or currently serve to protect us.

I’m not at all religious but I do remember some bible verses from school assemblies – especially those delivered by our headmaster Mr Babington. Mr Babington was a quietly spoken gentleman for whom we had a particular respect. In my first term at Ashlyns School, Berkhamsted, having fallen foul of a school rule concerning throwing snowballs within the school’s perimeter driveway (provoked by my brother’s mob who were outside the no-go area, pelting us), I found myself sitting nervously outside Mr Babington’s office. I don’t remember much of the ensuing interview but I wasn’t caned, for which I was thankful, and I am sure that the headmaster gave me a bit of a pep-talk about my future conduct.

To this day, forty-five plus years later, I can still hear in my mind one passage delivered by Mr Babington at school assembly, with his particular intonation – a quotation which applies perfectly to some of Bomber Command’s airmen whose stories I have looked into to date – such as Norman Lyford and Frank Law

– ‘Greater love has no one than this, that someone lay down his life for his friends’.

Our headmaster was himself a hero of the Second World War. As a Probationary Temporary Sub-Lieutenant (Sp) John Herbert Babington R.N.V.R was a bomb disposal officer. He had experimented with the dismantling of all types of bombs and had worked on the first German parachute magnetic mines.

In the autumn of 1940, during the ‘Blitz’, a bomb which had fallen at Chatham Dockyard was suspected of having a fuse fitted with an anti-withdrawal device. A short time beforehand an RAF Bomb Disposal Officer had been killed trying to disarm a similar bomb. Sub-Lieutenant Babington was lowered into a 16 ft deep pit around the bomb and tied a line to the head of the fuse. In trying to pull out the fuse assembly the line broke and he returned to the excavation to re-attached it. He needed three attempts before he got the fuse out safely and was then able to direct the lifting and removal of the bomb. Very little was known about this type of fuse mechanism by the Bomb Disposal Authorities at the time and John Babington’s experience in disarming the bomb was an important technical and practical break-through.

‘The King has been graciously pleased to approve the award of the George Cross for great gallantry and undaunted devotion to duty to: Probationary Temporary Sub-Lieutenant (Sp) John Herbert Babington R.N.V.R.’

John Herbert Babington GC was later to receive the OBE ‘for coolness and courage in operations involving great risk to himself’. 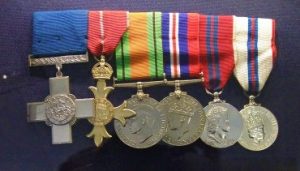 Perhaps – Greater love has no one than this, that someone is prepared to lay down his life for people he doesn’t even know.