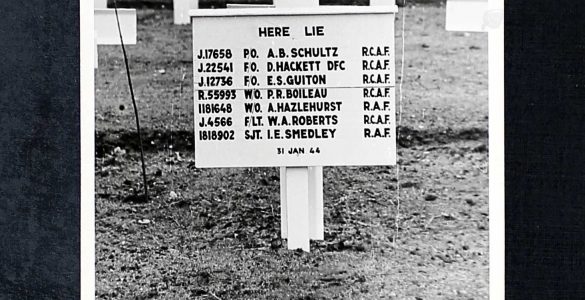 There was 10/10 cloud at 14,000 feet in target area. Load was dropped on centre of 6 Wanganui flares at 19.34 hours from 19,000 feet. Circle of Wanganui flares was seen approximately five miles in diameter, which seemed from a distance to be a concentration. Some T ~I Red were seen bursting under cloud. No results observed. Landed base undamaged. 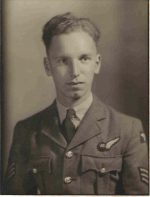 Wireless operator/ air gunner Warrant Officer Alan Hazlehurst had been unable to fly with his crew on the Brunswick op on 14th/15th January 1944, it is thought that he was suffering from the influenza virus that was circulating RAF Gransden Lodge at the time.

Alan had been pilot Gordon Drimmie’s w.op since June 1942 when the pair crewed up together with Newfoundlander John Evans, their navigator at 17OTU. The threesome flew Bostons with 88 Squadron between November 1942 and the following March when their posting to 22OTU converted them to medium bombers and added another two members to their crew – b/a Gilbey who had operational experience from 405 and 427 squadrons, and a/g Peterson recently graduated from gunnery school. 1659CU followed where flight engineer Sgt E Lane and a/g Sgt D Smith made up the seven man crew who were posted to RAF Middleton St George to operate Halifax mk V heavy bombers with 428 Squadron.

F/O Drimmie and his crew flew 8 operational sorties during August 1943 before transferring to 405 PFF Squadron.

Between 15th/16th September and the end of November the crew flew thirteen more operations before John Evans left the crew for conversion to PFF Mosquitoes being replaced by F/O Rodger B Jarvie for the 3rd /4th December raid on Leipzig. They completed three operations in December. Sgt John Waddell from P/O Kenneth Wilson’s crew flew instead of Alan Hazlehurst on the mid-January Brunswick sortie.

Tragically for Alan his crew-mates did not return, their Lancaster had been shot down and crashed near the village of Uepsen about 30km south of Bremen, with no survivors.

His wireless operator training took him to 10(Signals)RC Blackpool, commencing 30th September 1940, followed by 2 Signals School, RAF Yatesbury with a spell at RAF Bassingbourne for practical experience before returning to RAF Yatesbury, receiving his ‘sparks’ badge in May 1942. He received his ag brevet and Sergeant’s tapes when he graduated from his gunnery course at 8AGS RAF Evanton – Ross and Cromarty. His next posting in June 1942 took him to 17 OTU and crew-mates Drimmie and Evans.

Wireless op Sgt Reginald Stevens, navigator F/O Lloyd Speyer RCAF and f/e Sgt Norman Pyke were flying in P/O Kenneth Wilson’s crew on 21st/22nd January. The aircraft came down in the vicinity of Gommern, 15km south-east of Magdeburg, there were no survivors.

There was 10/10 cloud cover over East half of target area at 9,000 feet. Load was released at 23.01 hours from 18,500 feet by H2S after approach from South-west. On run-in saw Green T I cascading. On arrival, a good concentration of T I Green was seen on the ground with a ring of hooded flares and several flares Red/Green above. Many incendiaries were burning on and around the T Is. Saw searchlight activity and red flares or T Is about 25 miles to South-east of target. Landed base undamaged.

Navigator with F/O D E Biden’s crew, filling in as ‘spare-bod’. On 30th January Berlin op – Farb was one of four of Biden’s crew wounded by flak or Me110 hits.  Herber Farb DFC survived the war.

There was 10/10 cloud at 7,000feet in target area. Load was released at 20.29 hours from 19,000feet, by H2S. Aircraft encountered intense heavy flak 3 or 4 minutes after bombing. Target area was fairly well lit up by searchlights and fighter flares. Landed base undamaged.

1940-41 while a signaller with the Royal Montreal Regiment, transferred to RCAF in August 1941 as trainee Observer.

5 AOS ”A young man with leadership qualities. Is keen and hard-working.”

5’11½” tall, brown hair, brown eyes, ”clean cut, intelligent and respectful. An excellent type with above average ability. Good in air work and gives his best to all his work.” (at completion of 1 ANS).

then to 5AOS (Air Observer School) Winnipeg as instructor until 31/5/43.

P/O A B Schultz RCAF – air-gunner. 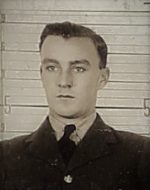 ‘I have always found him most reliable in every respect. Ambitious and at all times a perfect gentleman.’ – employer John Munro, Pictou, Nova Scotia.

f/g Sgt A B Schultz

In September the bulk of Woodman’s crew were posted to India, Bennett Schultz saw out the rest of his tour in the crew of F/Sgt Conquist.

r/g Sgt A B Schultz

7/10 cloud at 10,000 feet in target area. Load was released at 03.12 hours from 19,000 feet on H2S after timed run from Lake Muritz. Fighter flares on track on run in and out. Target area was well lit up by searchlights below cloud. Incendiaries were seen on ground through gaps but built-up area not seen. Intense flak and glow of promising fires seen soon after leaving. Landed base undamaged.

These were all young men who had yearned to join the air-force.

For the Canadian airmen it was unlikely that they would return home until they had completed two tours of operations, had been seriously injured, or the war ended.

Apart from the flight engineers these were all long-term airmen who had either already flown a full tour of operations and/or had been tasked to prepare many more aircrew for operational flying.

They had the misfortune to be flying during the Battle of Berlin at a time when the ‘Big City’s’ defences were well organised and tenacious, the weather was atrocious and they needed good fortune to return home.

If you can spare a minute please look at their faces, and consider what people said about them, and about the prospects and potential they gave up.

Many thanks to Marion, Pierre and to long term Canadian friends Ron and Bill for information about and photos of their relatives Alan, Rogers and Doug. Snapshots of the lives of others named below have been gleaned mainly from the magnificent Ancestry Genealogy website and various other sources including various squadron ORBs – so thanks too to the National Archives collections.

As ever – if you are related to any of the aircrew mentioned please contact me.  If you find errors – let me know and I’ll correct them.