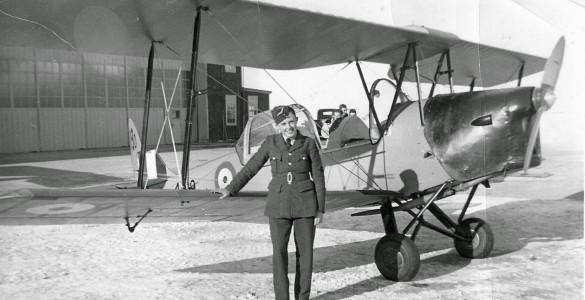 I haven’t had to look very far to find Bomber Command airmen who displayed acts of selflessness and bravery in looking after their comrades – P/O Frank Law, P/O Norman Lyford, P/O Reg Price among others. It could be said that they were just doing their job.
Like the fighter pilots of ‘the Few’ – bomber crews were ‘chucked in at the deep-end’ – to sink or swim.
The 166 Squadron ORB Summary of Events records that on the Berlin raid of 18th November 1943 the all-up weights of five of the squadron’s Lancaster IIIs was increased to 65,000lbs. The trial was, thankfully for those entrusted with the additional bombs, a success – the aircraft ‘took this weight and experienced no difficulties’.
On the following operation, on the 22nd the older Lancaster Is received an increase of 2,000lbs – a total all-up-weight of 63,500 lbs. ‘All took off successfully and had no difficulties with this increased weight, save for increased difficulty in making maximum height.’
Making his debut on this operation was 22 year-old pilot F/Sgt Roy Fennell aboard ED731 ‘T’ as second pilot to Sgt Horsley. The sortie went without incident. 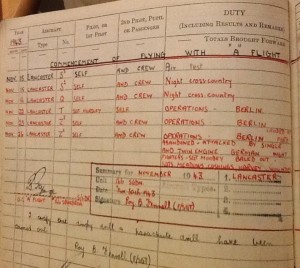 The next night Fennell and his own crew, who had arrived from 1656CU only a week previously, went to Berlin and back on their own account in DV365, Z², again unscathed. On 26th Fennell’s crew were again on the ‘Battle Order’, the target – yet again ‘the Big City’.
The crew were:- pilot – F/Sgt Roy Barton Fennell
flight engineer – Sgt William Pettis
navigator – Sgt James Smyth
bomb-aimer – Sgt Ronald Moodey
wireless op – F/Sgt Douglas Harvey
mid-upper – Sgt Charles Cushing
rear- gunner – Sgt George Meadows RCAF
take-off – 17.25
bomb-load -1x4000lb, 1400x4lb incendiaries, 430x30lb incendiaries
route out:- southerly down the country and out across the south coast over East Sussex, crossing the French Coast in the proximity of Baie de Somme, then turning due east to pass just north of Frankfurt where the bomber stream split with 150+ Halifaxes and 21 Pathfinder Lancasters attacking Stuttgart and the bulk of the force – nearly 450 Lancasters turning north-east to Berlin.
The crew of DV365 experienced difficulties, Roy Fennell’s log-book states :- ‘Abandoned – attacked by single and twin engine German night-fighters. Sgt Moodey baled out. Sgts Meadows, Cushing, Harvey wounded. Landed at Ford.’
The German defences tracked the bomber stream from its landfall at the Somme Estuary and sent up 55 twin-engine night-fighters to cover Himmelbett boxes in Belgium, Holland and North-West Germany. Simultaneously twenty-nine night-fighters – twenty Bf110s, eight Ju88s and a He219, all equipped with SN-2 radar were scrambled as ‘tame-boars’ and were directed into the bomber stream over Southern Belgium. Bad weather over Southern Germany restricted numbers of night-fighters scrambled there to thirteen Himmelbett patrols and five aircraft on ‘wilde-sau’ duties. 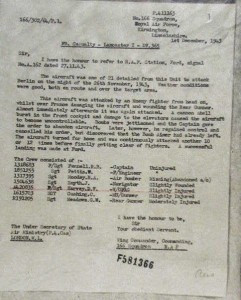 166 Squdron ORB Record of Events expands on Roy Fennell;s log-book entry:-
‘This aircraft was attacked head on by an enemy fighter over France, damaging our aircraft and wounding the rear gunner, and putting the mid-upper turret temporarily out of action. Almost immediately afterwards it was again attacked. A cannon shell burst in the front cockpit and also damaged the elevators, causing the aircraft to become uncontrollable. Bombs were jettisoned and the Captain gave the order to abandon aircraft. Later, however, he regained control and cancelled the order but discovered that the Bomb Aimer had already left. The aircraft turned for home and was continuously attacked another 10 or 12 times before finally getting clear of fighters. In all this time the Rear Gunner, Sergeant Meadows, despite his injuries, continued to fight his turret. The aircraft finally landed successfully at Ford, badly damaged. The Rear Gunner was severely wounded and the Wireless Operator, Navigator and Mid-Upper Gunner slightly wounded’.
Combat reports were recorded for each separate action. Many thanks to Archie for providing extracts from partial reports for two of the several combats experienced. Although in a standardised format they still convey the tension and relentlessness of the exchanges:-
‘Enemy aircraft attack from port quarter up to dead astern breaking away to port bow in shallow dive.
Our pilot corkscrewed to port as soon as enemy aircraft had committed himself to an attack at 600 yards range. Mid Upper gave the evasive order – corkscrew port go.
Enemy aircraft opened fire at 600 yards range firing two short bursts until breakaway, scoring hits on starboard mainplane and tailplane.
Both Mid Upper and Rear Gunners opened fire at 600 yards range firing long bursts until breakaway. Port gun became unserviceable in Mid Upper turret owing to being hit by cannon shell. Wireless Operator and Navigator injured – Wireless Operator in the back of the head Navigator in the left shoulder. Damage to enemy aircraft not observed.
Mid Upper fired 250 rounds. Stoppage in left hand gun due to damage by cannon shell. One of the left hand guns in the Rear Turret was also hit and put out of action after the Rear Gunner had fired 150 rounds.
Mid Upper 1615703 Sergeant Cushing. Rear Gunner R191205 Sergeant Meadows.
Monica warning received five minutes before attack. Pilot corkscrewed on warning but as no attack was made resumed course.
Enemy aircraft carried out a normal attack and the correct evasive action was carried out by our crew.
Enemy aircraft was first seen by Mid Upper at 800 yards range. The combat manoeuvre ordered by the Mid Upper was the corkscrew. Enemy aircraft opened fire at 600 yards range firing long bursts until the breakaway. No damage to enemy aircraft observed. Enemy aircraft scored several hits on our aircraft, starboard mainplane and also tailplane, Wireless Operator and Navigator wounded.
Third Combat:-
Night 26th/27th November 1943 Lancaster I ZZ 166 Squadron DV365 Berlin.
Position between Charleroi and Caen Time between 1935 and 2030 hours.
Visibility hazy. No cloud.
One enemy aircraft Ju 88. No lights carried. Armament situated in nose of aircraft.
Mid Upper first sighted enemy aircraft at 400 yards on the starboard quarter slightly up.
One attack. Enemy aircraft attacked from starboard quarter up breaking away to starboard beam level.
Mid Upper gave the evasive order – corkscrew starboard Go on first sighting enemy aircraft.
Enemy aircraft opened fire at 400 yards firing one continuous burst until breakaway. Mid Upper opened fire until ammo in the right hand gun was expended. Left hand gun was out of action due to being hit. The crew are not certain if Rear Gunner Meadows opened fire on this attack or not as he is now in hospital wounded, no information can be obtained at the present time.
No claims of damage to enemy aircraft. No hits occurred to our aircraft. 100 rounds from the Mid Upper. Unknown from the rear turret.
Mid Upper 1615703 Sergeant Cushing. Rear Gunner R191205 Sergeant Meadows.
Monica – No warning given.
Enemy aircraft carried out a normal attack and the correct evasive action was taken. The Gunners were rather handicapped in the shooting having had some of their guns put out of action and also servo ducts damaged.
Enemy aircraft was first sighted by the Mid Upper at 400 yards range on the starboard quarter slightly up. The combat manoeuvre given was corkscrew starboard. Enemy aircraft opened fire at 400 yards range. Mid Upper opened fire with one gun firing until he ran out of ammo. No damage to enemy aircraft observed and no damage to our aircraft ‘
By all accounts there followed seven or more subsequent attacks by enemy aircraft. It must be assumed that as Sgt Cushing had now expended his ammunition Sgt Meadows must have played his part in subsequent combats.
For his part in the actions rear gunner Sgt George William Meadows RCAF was awarded the Conspicuous Gallantry Medal. The citation reads:-
‘This airman was the rear gunner of a bomber detailed to attack Berlin one night in November 1943. During the operation the aircraft was attacked by a fighter. Bullets from the enemy aircraft hit and damaged the mid-upper and rear turrets, one bullet struck Sergeant Meadows in the back, which was deflected by the wiring in his electrically heated clothing, and came out in the groin. Another attack developed, and the mid-upper gunner, the wireless operator and navigator were wounded. Despite his injury, Sergeant Meadows remained in his turret and by his excellent co-operation with the pilot, together with his good shooting, beat off a further eight attacks by fighters. This airman showed skill, courage and fortitude of a high order.’
It transpired that bomb-aimer Sgt Ronald Moodey sadly did not survive the bale-out. It is understandable that he was the first to exit as the b/a’s position is directly over the escape hatch. Sgt Moodey’s remains were interred in Hotton War Cemetery – grave VIII. E. 1 although it is likely that he was originally buried in a cemetery in the locality his body was found.

Despite surviving what must have been a very harrowing experience F/Sgt Fennell was not destined to be one of the ‘lucky’ airmen who would fly on to survive his tour of operations. Having operated throughout the ‘Battle of Berlin’ Roy Fennell, James Smyth, William Pettis and Douglas Harvey were killed on the disastrous Nuremberg raid at the end of March 1943 – the last operation of the Berlin campaign, following which Bomber Command’s attentions were concentrated on the build-up towards the Allied invasion of Europe.
Charles Cushing is thought not to have been one of Fennell’s regular crew but arrived at Kirmington via 1662CU. Sgt Cushing was posted missing from the operation against Berlin on 16th/17th December flying with F/O Follett’s crew, their Lancaster crashing at Diepholz.
Thirty year-old Canadian George Meadows, who came from the village of Bowsman, Manitoba, was immediately posted ‘non-effective’ because of his wounds and did not return to operational flying until April 1944. It appears that Sgt George Meadows CGM survived the war. 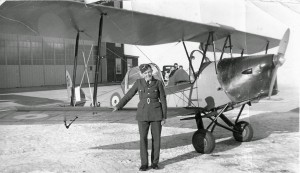 It is perhaps surprising that Fennell himself didn’t get a medal for his part, however, he may have been put forward for a ‘gong’ but the rescinded order to abandon may have been a factor in his not being decorated.  After all – I guess that Fennell was just doing his job

“This is my uncle Roy, my father’s brother. How proud am I. He was my grand mothers favourite child and as I was born on the same date, I was favoured too. Thank you for the research and the photo”
“Kirsty, I am so pleased you found this blog and thank you for your comment. There’s more to come concerning Roy and his crew-mates, so please keep an eye out in the coming weeks. It means a great deal to hear how proud you are of your uncle.”