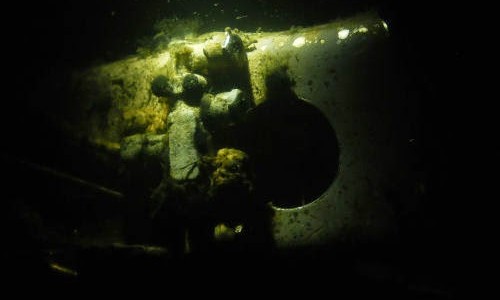 Following F/Sgt Bill Allan’s misdemeanour of 20th October 1943 the mid-upper position in Jim Ives’s crew was subsequently occupied by stand-in gunners. On the 22nd October sortie to Kassel, Sgt Frank A Sugden, 21 year-old married man from Hackney, east London was pressed into service as Jim’s mid-upper gunner.
After the previous abortive sortie F/Sgt Ives, Sgt Bell, F/Sgt Goodrick, F/Sgt Yates, Sgt Hay, Sgt Sugden and W/O Johnson returned safely from Kassel in ED938 having successfully completed the operation – ‘up 18.00, dn 00.10. Attacked 21.15hrs, 19,600ft, good visibility, bombing well concentrated in bombing area’.  Due to thick, low cloud and heavy rain over the Lincolnshire Wolds ED938 was diverted to RAF Blyton where foggy weather kept the crew stranded until the following day 24th October when they made the 20minute return flight to Kelstern.
From available records it appears that 1943 had been a tumultuous year for Sugden. In the first quarter he had married Helen Beer who presented him with a son, Antony, in September. Frank’s father Edward Victor Sugden is thought to have died in June.
The year ended tragically for the family as Frank Sugden was posted missing in the early hours of Christmas Eve 1943 when Lancaster LM421 of 625 Squadron was shot down south of Berlin. The bodies of four of the crew were interred at Mittenwalde, the bodies of the three remaining crewmen were not apparently recovered.
Following investigation by the Missing Research Enquiry Service the remains of pilot Sgt Geoffrey Clark, bomb-aimer Sgt Arthur Naylor, and gunners Sgt Charles Harrison and Sgt Frank Sugden were exhumed and re-buried in the Commonwealth War Graves Cemetery in Berlin-Charlottenburg (graves 5.E.7 to 5.E.10). Flight engineer Sgt Ralph Parkinson, navigator Sgt Donald Walker and wireless operator Sergeant William Whitmarsh have no known grave.
In (about) 2012 a German diving group followed up a local story that a British bomber had crashed in Motzener See.
A contemporary eye-witness report in a local museum pin-pointed the date to the eve of Christmas Eve 1943.  Mr. Herbert Siecke had at the time been a sixteen year-old messenger with the fire and rescue organisation, based at a community centre in the village of Motzen on the south-eastern shore of Motzener See. There was an air raid alarm that night and Herbert was sheltering in the safety of the centre’s slit trench with warden Peter Rudolph and Fire Chief W Hahn. The weather was cloudy and windy.
Suddenly they heard the sounds of aircraft above the clouds, volleys of machine-gun and cannon-fire – a night-fighter attacking a British bomber. The occupants of the trench crouched down as they heard loud whistling noises from above. The whistling was followed by a fiery inferno and explosion before the bomber disappeared into the Motzener Lake. Burning aviation fuel covered the crash area but soon afterwards, when the fire had died down the Rudolph, Hahn and messenger Siecke drove with others from the fire department to the village bathing site. There they found hundreds of dead fish, aircraft wreckage and an open parachute canopy being driven towards the shore.
The fire brigade had access to a boat but the stormy weather and strong waves made it very tricky to recover the parachute. Eventually the parachute and pieces of aircraft wreckage were gathered up and taken to the fire-station. Four bodies were recovered and identified.
Herbert Siecke referred to that night as one he would never forget.
Lancaster LM421 had taken-off from Kelstern at a-quarter-to-midnight. It was intercepted and attacked, at an altitude of about 6000m at just after four o’clock in the morning of Christmas Eve by a night-fighter, thought to have been from 11./NJG5 flown by Lieutenant Georg Fenk. The bomber sustained serious damage and the fuel tanks ignited.  Sgt Geoffrey Clark apparently attempted an emergency landing but the Lancaster crashed into Lake Motzener.
When the divers began their search their initial dive was made based on an approximate map plot of the crash and a couple of pin-points on the shore. The cold and dark hour-long dive revealed a muddy lake bottom, swirling with sediment and the offering of a dark shape emerging from the mud and murk.
For the second dive information from the lake’s fishermen as to where they’d fished out aircraft debris led the divers to the wreckage of Sgt Clark’s 625 Squadron Lancaster on the lake bed.

Many thanks to the fascinating Easydive site – where you can see more about their work, also more photos of the remains of LM421.
http://www.easydive24.de/ziel_deutschland_motzenersee.php
If there are relatives of any of the crew of LM421 – please get in touch – post a comment here or visit www.jcproctor.co.uk and use the contact form.
Thanks to everyone who has visited the site