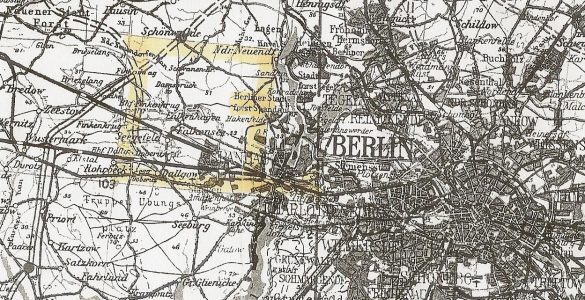 ‘In spite of very suitable conditions for fighters over target the chief centre of activity seemed to be round position ‘Q’ , attracted by the route markers.’

As the bombers wheeled beyond Fehmarn and swept over Lake Muritz towards Berlin, the German night-fighter force was overhauling the bomber stream having been directed to the ‘Big City’. Once the stream had been engaged the fighters chased through it, engaging bombers as they came across them – there were more potential victims ahead. 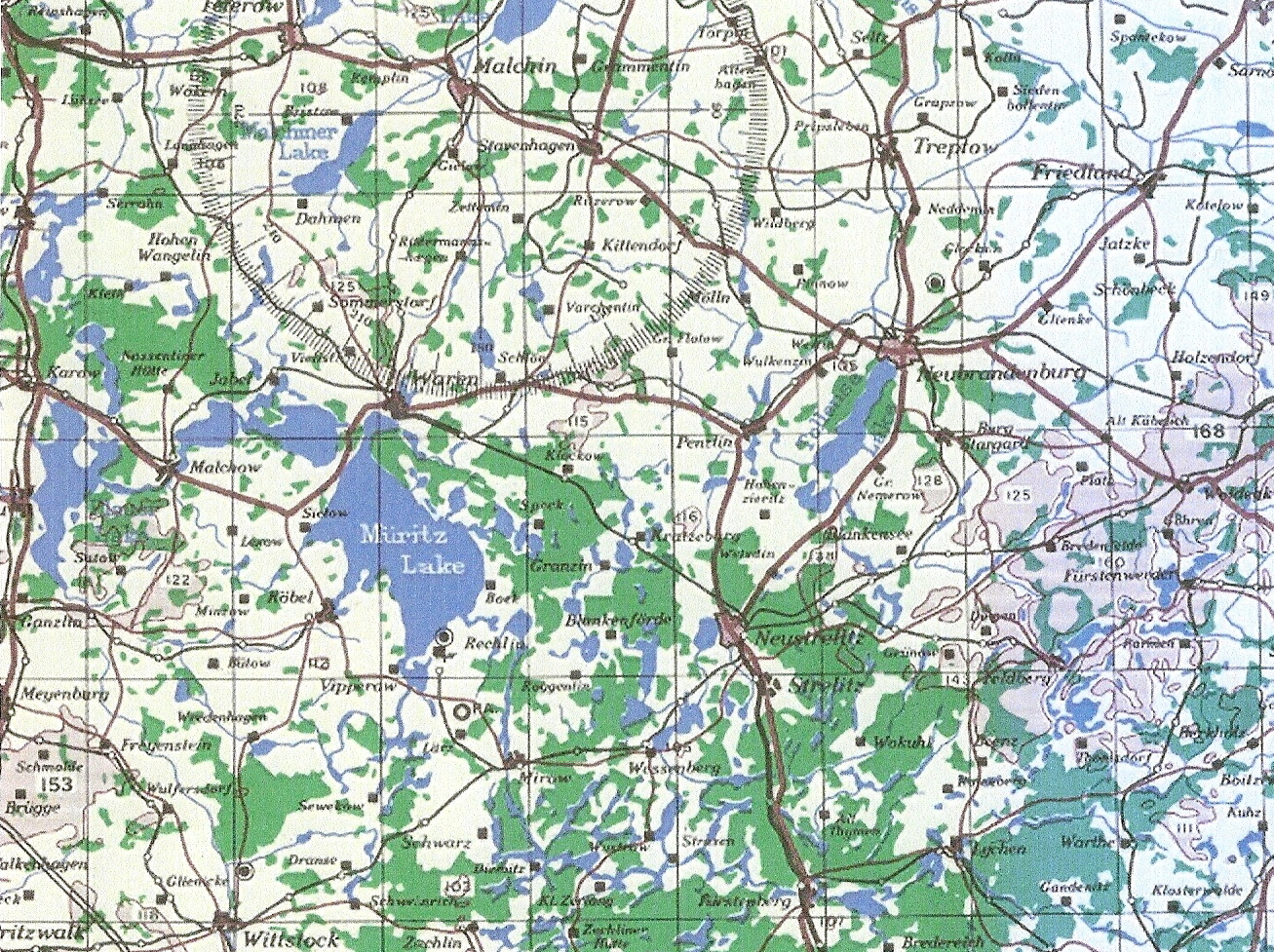 Bombers earlier in the stream had a relatively quiet time of it. As the first bombs were going down, fighters were starting to engage the bombers and more and more combats would have been evident with tracer, high flak, rockets, lower flak trying to shoot out the green-starred, red sky-markers, with the cloud layer lit up from below by search-lights, percussions of exploding bombs and the glow of developing fires. Smoke plumed above the clouds. Above the bombers the sky was lit by fighter flares sown by German support aircraft and light from the half-moon. Combats were spreading, flaming aircraft fell into the cloud-cover, combats were happening at the same time in different parts of the sky…

It is not possible to match night-fighter claims with downed bombers – timings for bomber losses are generally unknown and locations for fighter victories are vague or non-existent. To give some idea of the sequence of losses I have ordered the bomber crash locations progressing in the direction of flight of the bomber stream. This cannot represent the true sequence as some combats surely happened in advance of later losses, but it gives some sense of the advancing mayhem.

I trust Theo Boiten won’t mind me listing the timings of night-fighter claims:-

32 Lancasters and 1 Halifax were lost on this operation:-

640 Squadron P/O Douglas Affleck – Halifax III LW513 – Outbound and well before reaching enemy coast experienced a problem with one of the engines and opted to abort and return to base on three engines. 22.16hrs they were nearing the Yorkshire coast, radio message picked up to say pilot was having trouble controlling the aircraft. While attempting a landing at Catfoss airfield the aircraft stalled, dived into the ground and exploded on impact at 22:32hrs, around half mile south of the airfield near Catfoss Manor. All were killed. It was thought likely that icing made aircraft uncontrollable.

A Lancaster was shot down at 1910hrs approaching the Danish coast by Lt. Bruno Heilig, one of three Lancasters shot down over the North Sea. Two were claimed on the homeward leg by Lt. Guido Krupinski and Ofw. Heinz Vinke, both of 11./NJG1. 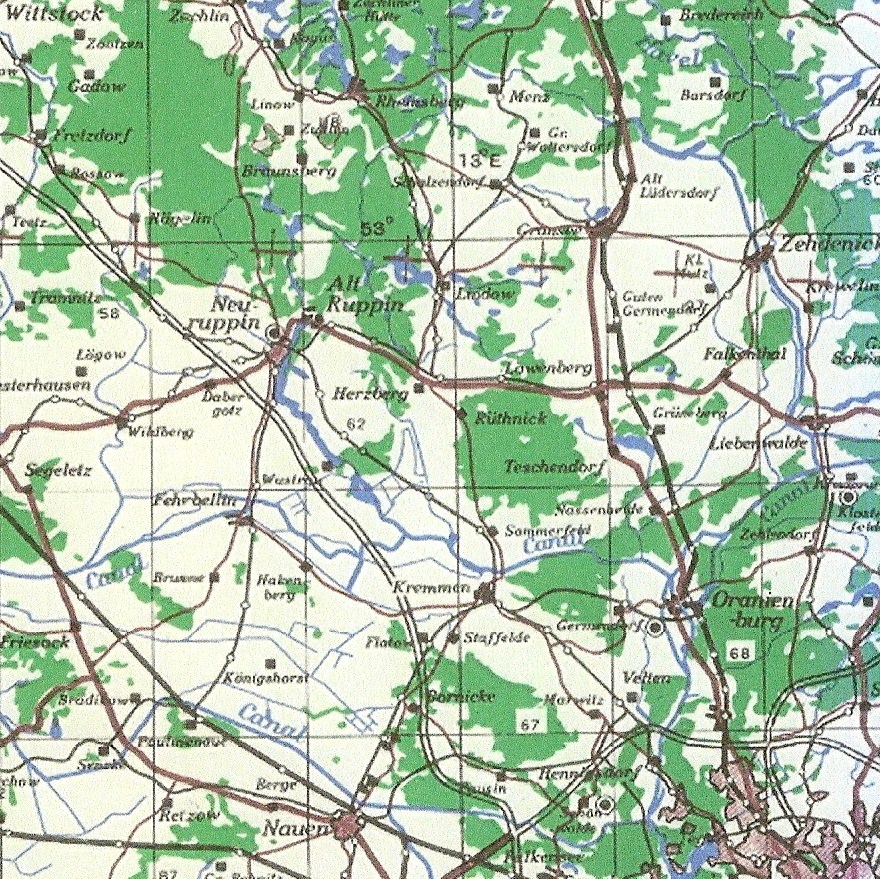 463 Squadron F/O Douglas Dunn RAAF – ED949 – Neuruppin aerodrome (52.94N/12.78E) Attacked by a night-fighter about ten minutes short of Berlin, setting fire to the starboard wing and the bomb-bay. Bale-out had been ordered and when F/Sgt Smith exited the aircraft the Lancaster was in a shallow dive and conditions inside did not seem critical. However, local residents witnessed the blazing aircraft dive into the ground and explode on impact at Neuruppin Aerodrome. Buried Neuruppin Cemetery, F/Sgt Smith survived as PoW.

100 Squadron P/O J A Crabtree – ND398 Karwe (52.86N/12.87E) – south-east bank of Ruppiner See nr Neuruppin. B/a Sgt J W Knight survived, having little memory of what had happened he came tosuspended from his open parachute without any recollection of how it deployed. Www.jcproctor.co.uk 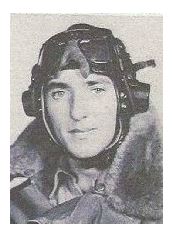 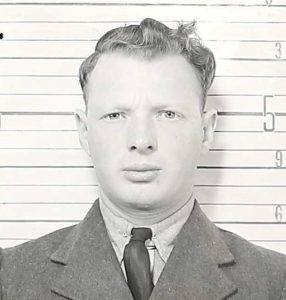 467 Squadron P/O Alexander Riley RAAF – DV378 – Riley – aircraft received direct fire from the enemy, seconds later aircraft went into spin, aircraft exploded as John Velastin was preparing to bale-out. Crew buried in parish cemetery at Manker (52.84N/12.68E), 28miles north-west by west of Berlin, between Neuruppin and Dreetz. ‘we were under direct cannon fire, A/C was ablaze….last I remember he was humped over his controls, instrument panel shot away.’ 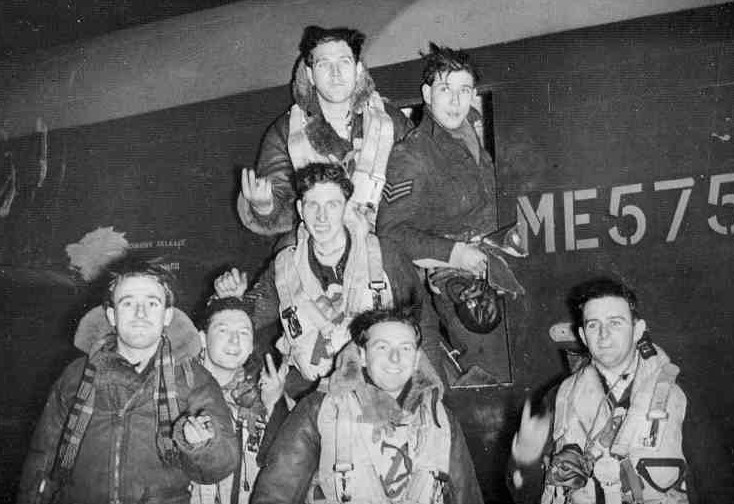 625 Squadron P/O Roy Gallop – JB122 Shot down by night-fighter about 30miles North-west of Berlin and exploded in the air, scattering debris over a wide area about half a mile west of Linum (52.75N/12.82E) village centre. Crew buried in Linum Cemetery in unmarked graves 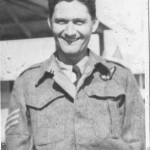 100 Squadron F/O Richard M Parker – JB673. – Schwante (52.74N/13.09E) – buried Schwante Cemetery Nr Germendorf. According to eye-witnesses the aircraft approached the village at medium height and was shot at by flak, following which it started to circle. Shortly afterwards the aircraft crashed and burnt for several hours on the ground. The wreckage was strewn over 100 yards. Two bodies were found 50 yards from the wreckage, one inside and three others nearby. The airmen were left lying in the field until they were buried in a communal grave in the NW corner of the village cemetery a few days later.

Richard Parker was identified by his identity disc, 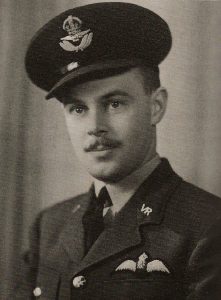 F/Sgt G A Orchard identified by his identity disc, 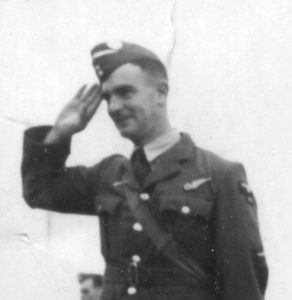 The aircraft had crashed between the villages of Schwante and Velten. The body of the seventh member of Richard Parker’s crew was found several kms away from the crash site at Velten. Sgt E Starkie, identified by his identity disc had been buried in Velten village churchyard with a wooden cross marked ‘Sgt Sterke’ – date of death 30th January 1944. 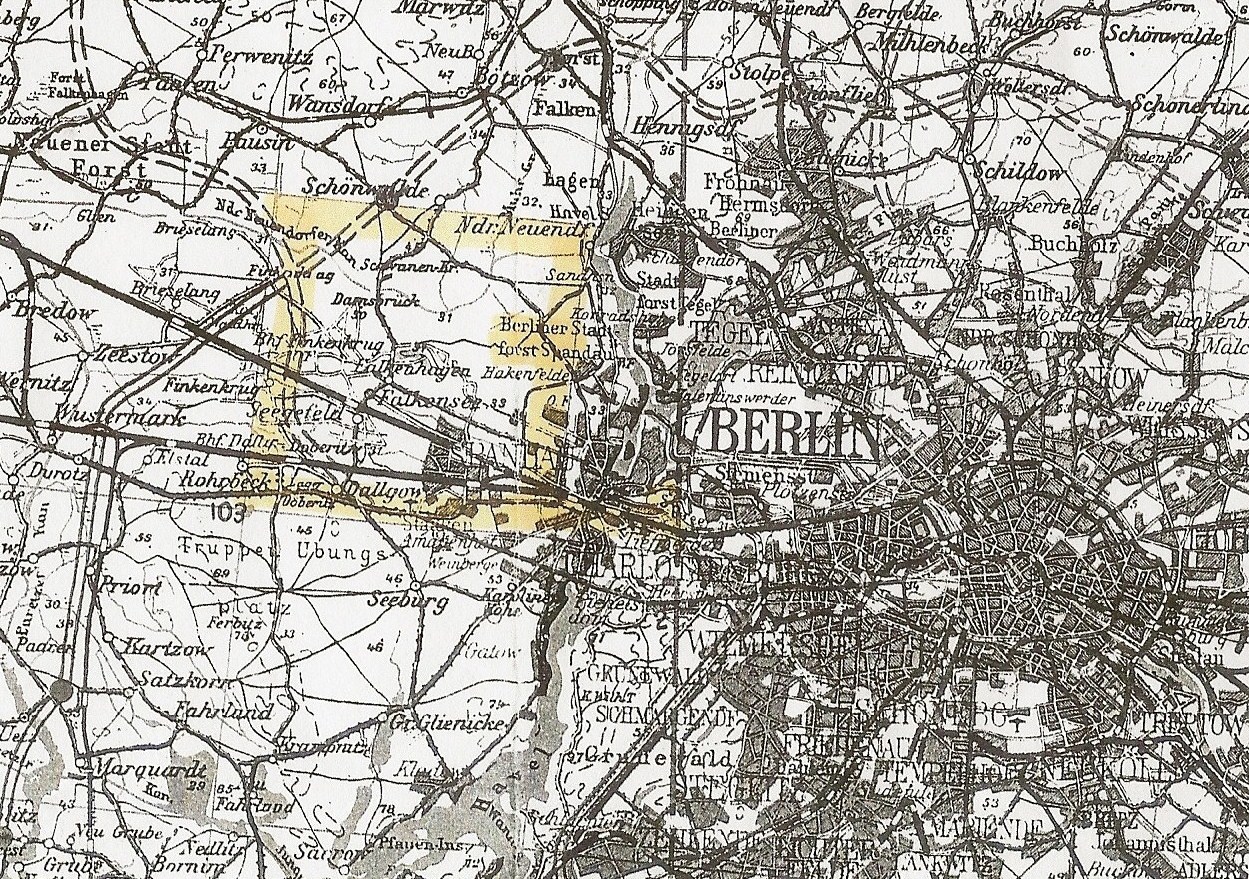 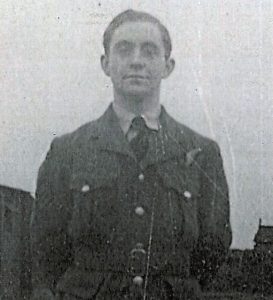 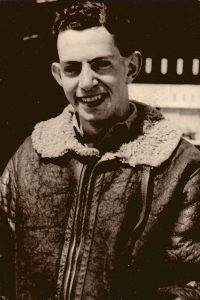 514 Squadron F/Lt George Chequer RCAF – DS735 – shot down at approximately 2030hrs approaching BERLIN. The aircraft crashed in flames and the crew baled out. F/S Alex Robertson, the Rear Gunner, walked SW for five nights before being captured near Magdeburg. He stated that the aircraft had been hit by flak. However, the ‘second dickie’ pilot, A/F/S Gulliford, later stated that the aircraft was hit by upwardly-fired cannon shells which immediately ignited the petrol tank. Possibly shot down by Obstlt. Gunther Radusch of Stab NJG5, who destroyed three Lancasters in the area between 2024hrs and 2030hrs. F/Lt Chequer, Sgt O’Brien, baled out too low for their parachutes to deploy, buried Mütlitz (52.56N/12.53E), Sgt Montgomery lost his life, apparently drowning in lake, buried at Päwesin (52.50N12.70E). F/Sgt Mortimer, PoW was subsequently killed 19/4/45 when Typhoons shot up a POW column near Boizenburg. www.514squadron.co.uk 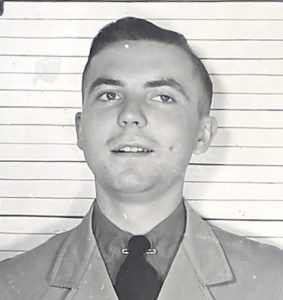 In December 1970, an RAF Lancaster was salvaged from Lake Krumme (52.45N/13.23E) in the American sector of Berlin. Its engine numbers matched those of Lancaster EE173. The evidence linking human remains found nearby and the aircraft were not considered strong enough at the time, and the remains buried in Rheinberg War Cemetery as those of an ‘unknown airman’. Evidence relating to the incident has now been examined, and with the help of the Air Historical Branch and research conducted by JCCC, it has been possible to identify the remains as those of Sgt Pulman whose grave was formally recognised at a rededication service on 13 September 2016 at Rheinberg War Cemetery, Germany.

BERLIN 115 Squadron F/Lt Harold Hicks RNZAF – LL648- Johannisthal (52.44N/13.51E) to the south of the ‘Big City’ – was also buried with his crew in Doberitz-Elsgrund Cemetery. Doberitz being at the south-western outskirts.

BERLIN – SW 405 Squadron F/Lt H L Shackleton – JA924 – attacked by a night-fighter shortly after releasing its bomb load. The port wing was set on fire and the aircraft went into a spiralling dive. At about 15,000 feet the aircraft’s fuel tanks exploded and catapulted the two survivors – pilot Shackleton and w/op Sgt H Williams out and they were able to open their parachutes. Remainder of crew Sgt Palmer, F/O Ashford, Sgt Newton originally buried Friedhof Doberitz-Elsgrund, Sgt Gibson, Sgt Walker, commemorated on the Runnymede Memorial. 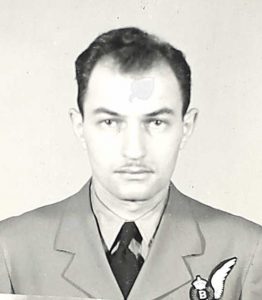 405 Squadron F/Lt Warren Roberts RCAF – ND462 attacked by night-fighter, crashed Loburg (52.11N/12.08E) presumed homebound. Originally buried in multiple grave on eastern side of Loburg Cemetery. The story from a local was that in the night (early morning) of 30th January 1944 the aircraft was hit by a night-fighter and caught fire. It was burning fiercely before it hit the ground, when it exploded and parts carried on burning.

156 Squadron W/O John Rule RNZAF – JA702 – Noord-oost polder – Marknesse (52.72N/ 05.86E) Sgts Cottam and Coyne were thrown out of the aircraft when it exploded and with the help of the Dutch Resistance evaded capture for several months until they were eventually captured and became PsoW. Details and crew photo of John Rule and crew appear on David Fell’s excellent www.northlincsweb.net site as their posting prior to 156 Squadron had been 103 Squadron.

97 Squadron F/Lt Ernest Clarke MiD – JB535- night-fighter homebound, above the village of Kolhorn (52.79N/04.88E) about 10 miles south-east of Texel on the North Holland peninsular 22.10hrs. It seems that despite being under heavy attack F/Lt Clarke attempted to avoid overflying the village, probably seeking a forced landing site towards the nearby Waarder Polder, but the aircraft exploded in the air.

97 Squadron P/O Allan Hart – JB659 (57.37N/ 04.75E) between Haarlem and Amsterdam 22.10. Attacked by Me BF110 night-fighter on return route from Berlin about 7 miles short of the Dutch coast. The cockpit section containing pilot Allan Hart and b/a Gordon Williams was blown from the fuselage and the remainder of the aircraft, with two engines still running, crashed into the Van de Bijl family’s farmhouse (‘Sumatra’) near Zwanenburg. The crew, farmer’s wife Mrs Van de Bil and four of her nine children were killed. Farmer Cor van der Bijl died two days later in hospital. The five eldest children had been sleeping in another part of the farm and survived.

F/O Hart RAAF and W/O Williams RCAF were buried at Haarlemmermeer (Zwanenburg) General Cemetery. F/e Sgt Leslie Clifton, nav F/Sgt Harold Boal RAAF, w/op Sgt William Jones and a/gs Sgt Douglas Hicks and F/Sgt Charles Price RCAF remained undiscovered for 57 years until the former site of the farmhouse was required for the expansion of Amsterdam docks when the wreckage of the fuselage was unearthed. The excavation was undertaken by the Royal Netherlands Air Force Salvage Team and the remains of the five missing crew members were recovered, identified and interred in the same cemetery as their crew-mates. Www.raf-pathfinders.com has details

www.550squadronassociation.org.uk has details of the events. F/O Morrison was killed flying operations with 103 Squadron in May 1944. 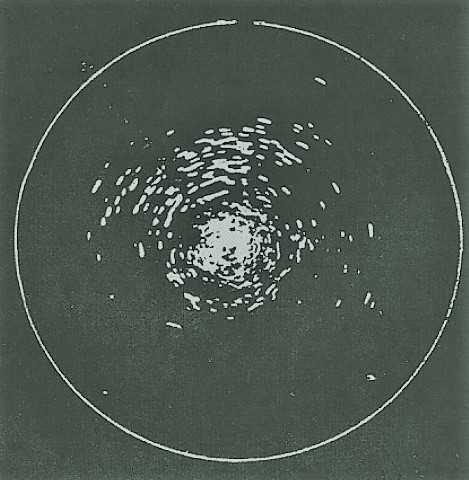 The 30th January Bomber Command operation against Berlin was the last raid of the current bombing period. German reports suggested that scattered bombing caused damage in more than seventy towns and villages outside the ‘Big City’. However, the centre and south-western corner of Berlin received considerable destruction, other districts also suffered significant damage. The death toll of Berliners that night has been estimated at over 1,000 souls, about five times the number of aircrew who perished.

The next large-scalemain force raid would be launched during the night of 15th/16th February, once again the destination was Berlin.