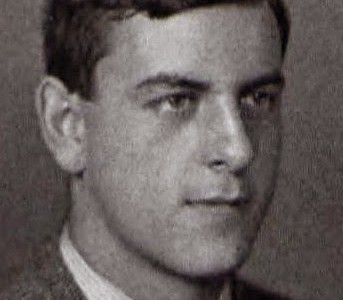 Anthony Francis Gobbie was born in London on November 24th 1919 the son of Francis J Gobbi and Evelyn Mary Marshall, Anthony was the middle one of three siblings, his two sisters were Marjorie and Evelyn. Francis Gobbi is thought to have been of Italian extraction – his father Fidele had been a cabinet maker in Islington in the 1880s.
At the age of 18 years Francis was working as an Audit Clerk for a Chartered Accountant. He served in WW1 with the 21st Reserve Battalion, Kings Liverpool Regiment and was awarded the Military Medal for bravery in the field. Between 1915 and May 1917 he was stationed in England during which time he married Evelyn Mary Marshall in November 1916. He subsequently returned to France as a signaller with 55th Division Royal Field Artillery.
In 1928 Francis Gobbi made a business trip across the Atlantic to the USA and his family followed soon after. In July 1932 the Gobbi family returned briefly from America destined for Chadwell Heath, East London. Subsequently Francis Gobbie, vice-president of London and Lancashire Indemnity Company of America, dealing in motor vehicle insurances and family, now with an ‘e’, emigrated to Weathersfield (possibly Wethersfield, Connecticut?), USA in August 1932.
It seems that the Gobbie family prospered in New England and it is understood that Anthony Gobbie attended Harvard University for a year before returning to England as the outbreak of war loomed, arriving sometime around July 1939. Anthony’s RAF service number 655545 suggests that he had initially followed in his father’s footsteps and joined the British Army before, as with a number of his RAF colleagues on course 42G, Anthony Gobbie transferred to train as a pilot. As the USA entered the war immediately following the Japanese attack on Pearl Harbour Anthony re-entered the USA ,not in a business suit, but wearing his RAF ‘blues’.
Anthony Gobbie graduated as a pilot on 5th August 1942 having completed his advanced training at Maxwell Field, Montgomery, Alabama and was commissioned in the rank of Pilot Officer. Unlike his friends and colleagues P/O George Stone, P/O Geoffrey Snow and P/O David Sumsion who were retained in the USA as instructors, P/O Tony Gobbie returned to the UK (initially aboard the Awatea? then the Queen Mary?) to complete his training and conversion to heavy bombers. 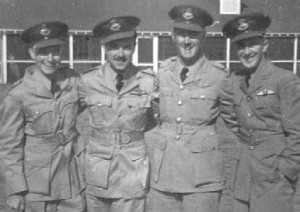 It seems that Anthony’s sister Evelyn was also drawn to the Air Force. The London Gazette records her commission to the rank of Assistant Section Officer (equivalent to the RAF rank of Pilot Officer) effective 28th October 1942.
F/O Anthony Gobbie became operational during the ‘Battle of the Ruhr’ and on 19th November 1943 the London gazette published the citation for the award of Acting F/Lt Gobbie’s DFC:-
‘F/Lt Gobbie has participated in very many sorties, including attacks on Berlin, Hamburg, Peenemunde and targets in the Ruhr. He has displayed skill, courage and determination, qualities which have earned him many successes. On recent occasions, against Leipzig and Kassel respectively, his efforts in the face of extremely adverse weather were worthy of the highest praise.’
The night the Gazette was published -18th/19th November 1943 Anthony Gobbie and his 57 Squadron crew, were operating Lancaster JB418 for the operation against Berlin:-
f/e Sgt J A Hemmings
nav F/O A E W Gardner DFC
b/a P/O R W Newcomb
w/op F/O T Scott
m/u Sgt T Pool
r/g F/Sgt F J Lambie
Their aircraft was shot down about 11 km from Dresden, at Bärnsdorf.
F/O Alfred Gardner DFC from Norbury, Surrey and P/O Richard Newcomb were killed, but their crew-mates survived to become prisoners of war.
A/F/Lt Anthony Gobbie was held at Stalag Luft 1 just outside the town of Barth, Western Pomerania, to the north-east of Rostock. The proximity of the camp to the town reputedly saved Barth from Allied aerial bombing throughout the war. Having been promoted to F/O in February 1943 and subsequently elevated to A/F/Lt Anthony Gobbie’s promotion to F/Lt was effective from 5th August 1944, two years to the day after his graduation.
When Stalag Luft I was liberated by Russian soldiers on the night of 30th April 1945 there were almost 9,000 Allied airmen imprisoned there – over 7,500 of whom were USAAF personnel.
Following repatriation to England, Anthony Gobbie yet again crossed the ‘pond’ on the Queen Elizabeth from Southampton to New York in 1947 and migrated to Florida where he married Lorraine Albin in Broward County in 1953. It seems that both of Anthony’s sisters, Marjorie and Evelyn also moved to Florida after the war.
Anthony Gobbie passed away in Dade County Florida on 26th December 1976, aged 57.