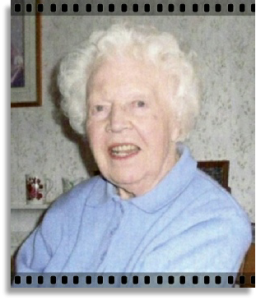 This page is dedicated in honour of Lilian Noble

Born in Paddington in the autumn of 1920, one of Lilian’s earliest memories was waiting outside factory gates while her father went inside to try to get work. It was surely with this experience in mind that her parents counselled her to find a secure and pensionable job.

At fourteen years old Lilian Noble started work with the Post Office, subsequently becoming a telephonist for the British Postal Telephone Service in August 1936.  From there she progressed to the Central Telegraph Office as a telegraphist and soon moved to a clerical post at CTO, followed by a clerical assistant’s position with the Post Office Savings Bank in February 1937.  At the outbreak of war in September 1939 Lilian volunteered to transfer to the Home Office and joined London’s Civil Defence organisation at the age of 19 to work in the basement war rooms of the London Civil Defence Regional Headquarters.

The LCDRHQ was housed in the Geological Museum, South Kensington, part of the Natural History Museum building at the junction of Exhibition Road and Cromwell Road. Here was the nerve centre for London’s Civil Defence where the control room co-ordinated all emergency services for the capital, with the map room giving emergency organisations a clear picture of the situation after bombing raids, allowing the proper deployment of services.

The workforce at LCDRHQ included a large proportion of keen young clerical officers, some as permanent staff members who had, as in Lilian’s case, taken entrance exams, and others with temporary status, such as Jim Ives and Allan Clifford.  Friendships at work continued outside working hours and Lilian’s close circle of friends enjoyed dances and a range of other social events.

When it became apparent that Jim Ives was leaving to join the RAF Lilian shadowed his job, which involved the requisitioning of buildings for Civil Defence purposes and also Allan Clifford’s.  Lilian and her colleagues at LCDRHQ fulfilled various other duties including fire-watching and motor-cycle dispatch riding.  Lilian’s dispatch-riding gave her an excellent knowledge of London. LCDRHQ’s dispatch riders were pressed into service to circumvent breakdowns in the telephone network during the Blitz.

Communications had to be maintained over the whole of the London Region which stretched from Potters Bar to Banstead and from Staines to Dagenham, with the administration hub in South Kensington.  The Civil Service D.Rs were taught to ride their motor-cycles by police instructors at the Police Training College, Hendon. Lilian and her colleagues not only had to get to grips with the bikes but also a variety of road surfaces such as cobbles, tram-lines and wood-block road surfacing, which was like an ice-rink when wet – on one occasion Lilian and her bike ended up on opposite sides of Baker Street.  They also had to cope with other hazards including driving in the black-out with hooded head-lamps. To make navigation even more difficult there were no road signs.

After the war Lilian stayed in post with the Home Office and worked in the Government Offices Building in Whitehall, designed by Sir George Gilbert Scott and overlooking the Cenotaph. Alongside the staff there were several different cats over the years, each one named Peter whether male or female.

Lilian was assigned to the department dealing with placing children committed by the courts into approved schools. Many had been ill-treated by their parents and the courts would place the children for their own safety in an approved school deemed most appropriate – whether religious, army or naval establishments, or even some agricultural schools.

At that time Home Office staff tended to stay in one post for periods of about three years unless they received a promotion. In 1949 Lilian moved to the Police Division during a period of high recruitment for young police officers.  There she dealt with the setting-up of training establishments, having responsibilities for eight centres across the country, a programme funded jointly by the Home Office and the Police Force.  Lilian’s duties included dealing with training programmes, furnishing and catering, also having responsibilities for interviewing overseas police officers to determine their requirements for attachment to other forces and training establishments.

Lilian’s next move was to the General Division where she dealt with a wide variety of by-laws, including Royal matters, coroners and cremations, and the examination of licensing applications to undertake experiments on animals for specialist doctors and vets.

The job Lilian found most interesting concerned coroners, burials and cremation where her daily dealings were with people’s complaints about the findings of inquests, mainly explaining why coroners courts had reached the conclusions they had. She found burial laws most interesting – the licences required for the removals of bodies (which stemming from body-snatching in the nineteenth century), the proper identification of bodies intended for cremation, and licensing to take the departed when moving house! Lilian’s discretion and efficiency were paramount in the licensing of cremations which required two medical certificates to be issued safeguarding against the covering-up of criminal acts by cremation and improving the detection of homicide – in such matters there was ‘always urgency, always distress.’

Without fail Lilian assisted with and attended the annual remembrance ceremony at the Cenotaph, even after retirement. Guests at the service of remembrance were received in the old Home Office building (vacated in 1977) where Lilian’s knowledge of the layout made her an obvious greeter and guide for wives of cabinet and opposition ministers, clergy, visitors from the British Legion and other honoured guests.

Home office personnel would be on hand at 9.30 a.m to receive and conduct guests to their allotted positions for the ceremony.  Wreaths from Commonwealth countries were lined up in corridors, in the front hall for Royal parties – one of the greeter’s responsibilities was to ensure that representatives received the correct wreaths.  Lilian had a personal reason too for attending the Remembrance Ceremony as every year she placed a poppy in the field of remembrance for her two dear pals Allan Clifford and Jimmie Ives.

Lilian served for forty years in the Civil Service, describing her role as ‘assisting the Home Secretary to carry-out ministerial duties’ with regard to the police, fire, immigration and prison services and the criminal law.

When I initially approached Lilian to ask whether she could tell me anything about Jim Ives her reaction was a significant spur for me to pursue the research – she was so pleased that someone was interested in ‘dear Jimmie’ and admitted to still thinking about him every day.

Not only did Lilian provide a great deal of information about Jim and their group of friends at LCDRHQ, she was always an enthusiastic recipient too. I will be forever indebted to Lilian for allowing me to read, and borrow Jim’s letters, written to her throughout his pilot training until the week of his death.

It was fitting too that Lilian’s letter of commiseration to Jim’s parents came to light and perhaps the most poignant of all, alongside Jim’s last letter to her, the letter written by Lilian to Jimmie, gently chastising him for not writing for a while – tragically he had been dead for a month.

Lilian accompanied Mabel Ives to the Runnymede Memorial dedication ceremony and continued to be a friend and support to Jim’s parents thereafter.