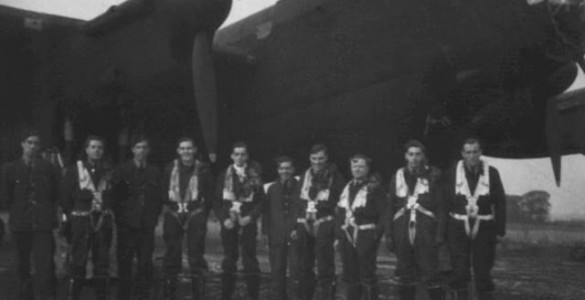 Sincere apologies for having gone AWOL for a little while, but work has (thankfully) been dominating proceedings. I haven’t been totally idle on the research front though and have plenty of new ‘gen’ lined up. My web-man ‘the boy genius’ is planning all manner of updates to the main website including the addition of many photographs – including cousin Jim’s ‘Arnold’ pilot cadet class 42G which is getting its own gallery. If you have any links with 42G please get in touch, similarly let me know if you recognise any names, faces or postings mentioned in ‘Does Life Hold Any More in Store?’.

Armistice Day is approaching rapidly – please donate generously for your poppies and spare a thought during the silences for all our servicemen, past and present, who have served to keep us all safe.
A recent contact regarding a gentleman’s teenage memories of Frank Law’s 103 Squadron crew not only enhanced Law’s story but has opened up a fresh line of research.

Mick was a lad of about fifteen years old when he first met Frank Law and his crew-mates. He recalls that the date was 13th October 1943 when an entire bomber crew turned up at his sister’s twenty-first birthday party – her friend knew one of the crew and invited them all.

‘We were astonished when a full bomber crew came through the door ! Astonished and privileged I might say as we were well aware of the job they were doing. We would watch the bombers in their hundreds flying down the Trent valley in the evening.’
It was evident that the crew enjoyed the family’s hospitality as whenever flying allowed they visited several times over the next few weeks and got to know Mick and his family pretty well.
‘I think they enjoyed being able to be themselves’.
Mick remembers that Australian bomb aimer Les Kay seemed to be quieter than the others but kept an eye on the rest of his crew-mates although there was nothing more to watch over than high spirits. Ron Johnstone ‘was the life and soul of the lads but Frank played his part also, being nicknamed “The Count of Elsham Wolds” because of the elegant cigarette holder he sported ! Happy memories!’
It says something about the tumultuous events of the time and the people involved, that those visits to Mick’s family home, made over a few weeks during the winter of 1943/44 are still memorable over seventy years later.
‘I was a lad of about 15 at the time and pretty impressionable I suppose. But I will never forget those brave lads.’ 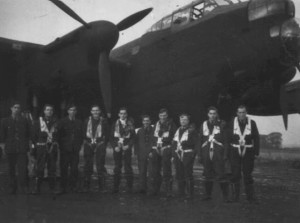 Very many thanks to Mick for sharing his memories of Frank Law and crew and for identifying who’s who in the crew photo.
I would urge everyone to search family photograph albums for photos of relatives who served in the Second World War. That old flying log-book may contain answers to someone else’s research – take a look at the postings listed on the inside cover and google them (other search engines are available of course) – they will be of interest to someone, somewhere.