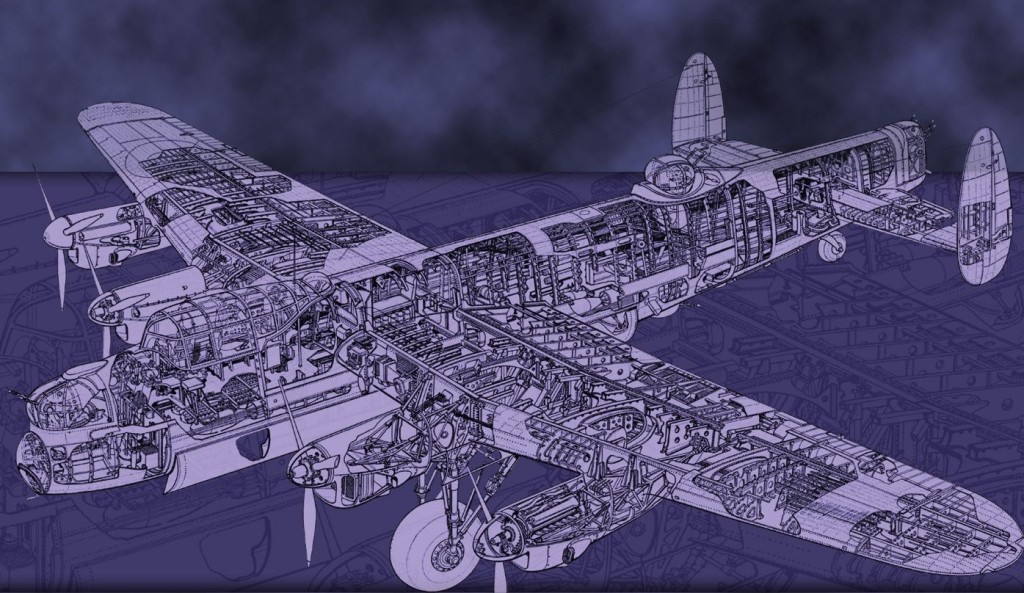 A short history of the Avro Lancaster.

The Avro Lancaster’s design was entirely a product of its function, the fuselage being dominated by the bomb-bay, the wings performed their aerodynamic function and carried the fuel tanks within and the four power-plants were mounted with their own ‘plumbing’ allowing an engine change to be straightforwardly achieved in five hours or so.   The aircraft had no armour, except for a small plate immediately behind the pilot’s head.  The operators of the machine were arranged on top of and at the extreme ends of the craft, the greenhouse style cockpit canopy affording excellent visibility.  The most vulnerable spot for a Lancaster was the blind-spot below it, and the drawback for the crew, reflected by casualty figures, was that it was difficult to escape from.  The forward escape hatch was underneath the bomb-aimer’s prone position, in using the fuselage main door there was a danger of hitting the tail immediately after baling-out.

In broad terms, the Lancaster had a gross weight of 29tons, a speed of about 200mph but set in the interests of best fuel economy, and taking into account weather conditions, wind speed and direction, altitude, climbing or descending, turning or straight and level flight and a multitude of other factors.

ND360 was from serial range ND324 to NE181 Lancaster Mk IIIs manufactured at the A.V Roe Chadderton works and delivered to various units during the period December 1943 to May 1944.  It was the eighth production batch of 600 aircraft and the third part of Contract No 1807.

A new Lancaster represented the latest in bomber  technology and the development and fitting of new gadgets and refinements was an ongoing process.  One of the major pieces of equipment being introduced to main force bomber units in December 1943 was H2S air to ground radar which aided navigation and target identification.  Up to recently H2S had been available only to the Pathfinder Squadrons but was now being fitted in main force aircraft.  Such advances in navigation and target finding equipment allowed RAF Bomber Command to operate in all but the worst weather conditions.

Jim Ives had collected ND360 from RAF Binbrook on 24th December 1943 after it had been newly delivered by an ATA pilot.

On the Berlin operation of 20th/21st January 1944, ND360’s port inner engine was damaged by flak and while it was in dock for repairs it was kitted out with H2S equipment.

The Lancaster was capable of withstanding significant damage – 100 Squadron pilot F/Sgt Francis Wadge lost 6ft from the end of the port wing of ED749 as well as incurring damage to propellers and main-planes in a collision with a night-fighter on the night of 20th/21st February 1944.

The Luftwaffe was well aware of the Lancaster’s blind-spot giving rise to the fitting of upward-firing pairs of cannon to dispense ‘Schrage-muzik’ fire from below, aimed for the fuel-tanks inside the Avro’s wings between the two starboard engines ‘and pulled away immediately without firing at the crew at all’.  The standard tactic for night-fighters with conventional forward firing cannon and machine-guns was the ‘von unten hinten’ method – from below and behind.  The night-fighter would make a radar approach from beneath its target and initially fire at the fuselage to disable the gunners and/or other crew members.  The von unten hinten attack may also have involved flying beneath the bomber and dropping back to open fire.

The loss of an engine to enemy fire did not adversely affect the handling or capabilities of the Avro Lancaster, although each engine provided hydraulic power to gun turrets.  Inboard engines also powered  pumps and accumulators for the undercarriage, flaps, bomb doors, carburettor intake covers and fuel jettisoning. The  undercarriage and flap-jacks were of a relatively large capacity ‘it is not normally possible to operate them by hand-pump in the time available in an emergency’

A compressor on the starboard inner engine charged the pneumatic system air-bottle.  Both inboard engines had a vacuum-pump, one for operating the instrument panel, one for the bomb-sight gyros.  A switch-over cock enabled a faulty pump to be cut-out from the bomb-sight to instruments.  The port inner operated a R A E compressor for the automatic pilot, MkIV and for the computer.

When ND360 was lost it had 72 flying hours ‘on the clock’.  Only two pilots other than Jim Ives had  flown ND360, F/O Vernon Jones – on the Brunswick operation of 14th January 1944, and F/Lt Ken Major on a fighter affiliation exercise 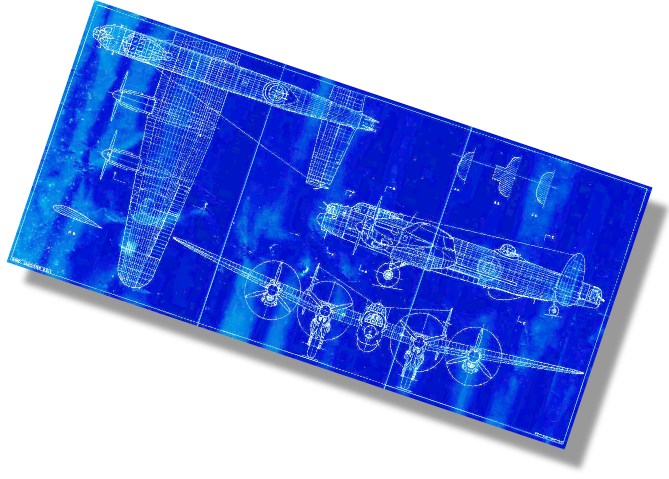