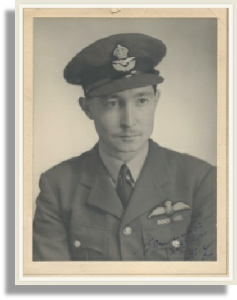 This page is dedicated in honour of Josiah Lewis Spiller

‘Here is the photo of my father. I guess it was taken towards the end of the war. It is a photograph of a young man who has survived a gruelling drawn out nightmare of a time. Although he is a survivor there is I think great sadness in his eyes’. – David Spiller

During the Second World War young men came from all walks of life to give themselves up to the armed forces for the duration of hostilities.  For many the desire to fly aeroplanes drove them to the Royal Air Force to join pre-war regulars in the newest, untested branch of the services. Young men left  professional occupations to retrain as fighting men and, with luck, survived and worked their way up to positions of responsibility where their leadership inspired those around them.

Acting Squadron Leader Josiah Lewis Spiller was just such a man.  As with many of his generation, having survived the war in a most hazardous occupation – flying operations for RAF Bomber Command,  ‘Bill’ Spiller resumed his pre-war profession and hardly ever spoke of his wartime experiences.  His son David recalls that until his father’s death all he had known was that Bill had been in the RAF.  David can recall his father only ever saying two things about the war; the first was in reply to ten year old David’s question – ‘What did you do in the war Daddy?’  His reply – ‘It was awful!’ – that was it.

The other occasion was when David and his father had been to see the film ‘The Great Escape’.  They were walking back to the car in the dark and Bill said ‘You know, I knew three of those chaps who were shot. The Germans were complete b-––––ds’ (fifty of the escapers had been rounded up and shot in a field).  Again, that was all.

It was not until after his father’s death in 1986 that David found log-books, medals and some photos hidden away.

Josiah Spiller had joined the RAFVR sometime in 1939 and his commission to Pilot Officer on probation from LAC rank, effective from 14th January 1940 was gazetted on 6th February of that year.  He served in various bomber squadrons as an air-gunner between 27th January 1940 and 4th October 1941 during which time he was promoted to F/O in January 1941 and flew a total of 28 operations and 169 other flights and exercises.

Bill Spiller then went to Canada for pilot training.

Having already filled one flying log book F/O Spiller started entries in his second log in mid-December 1941, he was elevated to F/Lt status with effect from 14th January 1942.

On 29th/30th September 1943, having taken-off from Oakington at 18.41 Lancaster JB225 returned early with engine failure and crash-landed at Swanton Morley airfield at 21.37  the 7 Squadron crew comprised:- F/Lt J L Spiller, Sgt F J J Kofoed, F/O C Barnes, Sgt A C B Halvorsen, Sgt A A Tucker, Sgt G E Armstrong, Sgt H E Jacobs – to the pilot’s great credit no injuries were sustained.  There were a couple of hundred other flights, amongst which was an exercise flown at 625 Squadron with Jim Ives on 5th November 1943, details of which are given as:-

(F/O Bentley was this crew’s regular navigator, not apparently required on a fighter affiliation exercise).

The crew flying with F/Lt Spiller on this occasion had previously served with 100 Squadron.  In mid-June 1943 they had been flying with pilot Sgt L H Wright when their aircraft was badly shot-up by a Ju88 and crash-landed back at Grimsby.  Sgt Robinson was f/e on that occasion and was apparently injured in the crash-landing.  The crew was posted to 625 Squadron as part of the contingent from 100 Squadron’s ‘C’ Flight which constituted the heart of the new squadron at RAF Kelstern.

Pre-war skills and training from ‘civvie-street’ were, where possible, utilised on the squadron – Bill Spiller’s legal training came in useful in helping to administrate paperwork connected with disciplinary matters.

For example, in the case of  Jim Ives’s air-gunner F/Sgt William Allan’s short, but not insignificant absence without leave from RAF Kelstern, F/Lt J L Spiller was engaged to take statements from the parties affected by Allan’s absence:- S/Ldr Canham, F/Sgt Ives, W/O Johnson and F/Sgt Allan on 26th October 1943.

Allan refused to sign his first statement – all he would say was that he had stayed overnight in Grimsby and had intended to catch the 07.30 workers’ bus back from Grimsby but had overslept.  At the subsequent Court Martial hearing William Allan chose not to give evidence on his own behalf, nor to call any witnesses in his defence but he did submit a more comprehensive statement which outlined the events, seemingly at the suggestion and wise counsel of F/Lt Spiller.  It is probably thanks to Bill Spiller’s advice that, despite being found guilty, F/Sgt Allan retained his Sgt’s chevrons and did not lose his Air Gunner’s brevet (which would have been the case had he been demoted to LAC).

F/Lt Spiller and his crew –

were posted from 625 Squadron to RAF Wickenby on 5th December 1943 where F/Lt Spiller took command of newly formed 626 Squadron’s ‘A’ Flight.

‘Bill’ Spiller is mentioned in Sqn Ldr Jack Currie’s memoir ‘Lancaster Target’  At the end of his ‘tour’ with one operation left to do Currie was expecting to finish with a ‘milk run’ to a relatively ‘easy’ target and was somewhat miffed when himself and his crew appeared on the battle order for the attack on Berlin on 28th January 1944.  Jack Currie intended to have it out with ‘Bill’ Spiller who suggested that it would be better to get it over with rather than ‘hanging around waiting for their last op getting more and more jittery’.  Berlin was to be an early (7.00pm) take-off, ‘you’ll be home by three, and you’re finished before you’ve had a chance to worry about it.’

All went well for the Currie crew and as predicted they landed in the early hours of the morning and a crate of beer was waiting for them, courtesy of  Flight Commander Sq/Ldr Spiller. 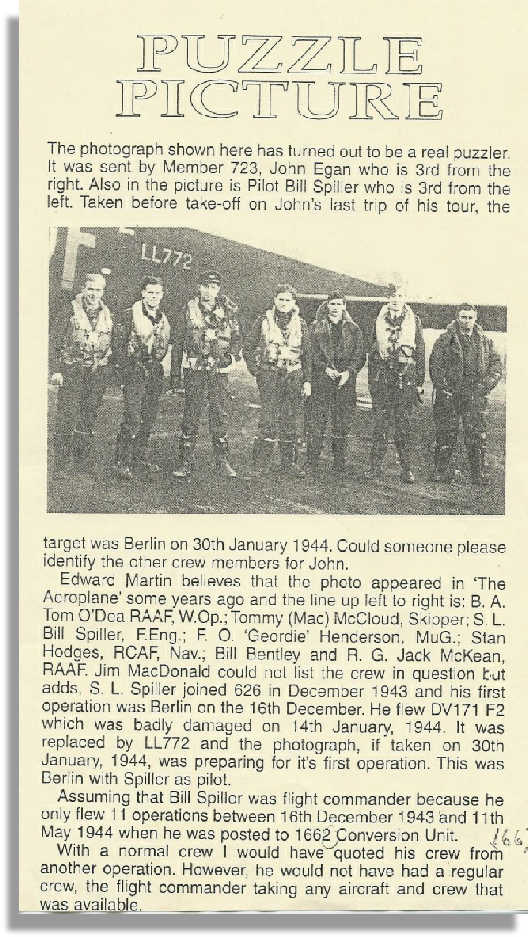 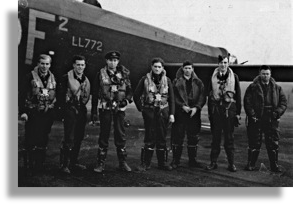 Recourse to Squadron records confirms that the crew accompanying Sq/Ldr J L Spiller in LL772 on 30th January was predominantly his regular crew, personnel as noted in the article but with the exception of mid-upper gunner John Egan who on that occasion filled in for F/Sgt Hodges.

The gracious award of the Distinguished Flying Cross by His Majesty the King to Acting S/Ldr J L Spiller of 626 Squadron was gazetted on 18th April 1944.

Bill Spiller’s last day of service, as entered in his Service and Release Book was 13th November1945.

After the war Bill Spiller resumed his studies and career as a solicitor with the Lee Conservancy Catchment Board.

The River Lea, a main tributary of the Thames, was used for many hundreds of years as a transportation route, for the extraction of water for settlements along its course, for fishing and drainage.  Major works to canalise the Lea were undertaken from the late 1760s and for the next hundred years or so to create the Lee Navigation which extended from Hertford to Limehouse Lock in the heart of London.  In the 1930s, 130-ton barges could reach Enfield and 100-ton barges ran from the Thames to and from Ware and Hertford.  The management of the Navigation and its catchment area was undertaken by The Lee Conservancy Board.

The Lee Conservancy Catchment Board, a separate entity from the Lee Conservancy Board, was established under the Land Drainage Act 1930 having responsibilities for various functions relating to water supply, fisheries, pollution and flood control and drainage in the catchment of the Lee Navigation.  By the late 1940s Bill Spiller held the position of Clerk of the Board with significant responsibilities – including for the preparation and submission of Bills for Acts of Parliament controlling the Conservancy Catchment Board, together with the wide range of legal functions necessary for the administration of the Board’s duties.

David Spiller remembers his father as ‘a very kind, quiet, academic sort of fellow’…’I never had any idea that he had been through such hell, but I am very proud of him’.