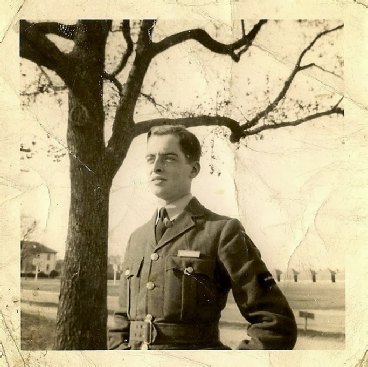 This is a dedicated page in the honour of Frank Law

Frank Law’s name crops up on several occasions in Jim Ives’ flying log-book. Later on, when Jim’s crew was split-up Sgt Donald Bell, Jim’s flight engineer, was posted to 103 Squadron where he later flew with Frank Law’s crew. Bell survived the incident in which Law’s Lancaster was shot down. Five of the crew, including Law, died.

Frank was born in 1923 to parents Frank and Charlotte (Lottie) Law, his birth was registered in the Anderston district of Glasgow. Frank had an elder brother John Alexander, born in 1921, the pair being known in the family as ‘Jackie’ and ‘Frankie’. The boys’ father was a policeman by profession.

Field, Montgomery, Alabama, before embarking on his AC Primary training course. It is assumed that all went relatively smoothly as Frank’s name does not appear in any of the relevant USAAF accident report lists for that period. He probably graduated on 5th August. 1942 as did Jimmie Ives.

He was neither retained as an instructor nor commissioned but returned to the UK as a Sergeant pilot, again, in all probability experiencing the ‘Awatea’ incident and sailing from New York on 5th September, disembarking from the ‘Queen Mary’ on 11th September 1942 . 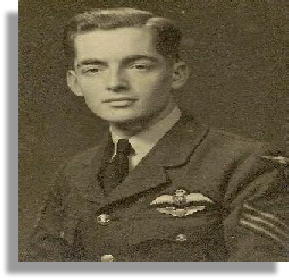 During the final week of 11(P)AFU course on 5th December 1942 at RAF Condover, a satellite airfield of RAF Shawbury, Sgts J Ives and F Law shared pilots ‘ duties on an instrument flying exercise.

On 4th April, Jim Ives’ first day at 27OTU, Ives and his crew had been practising low flying and circuits and landings. That evening another pilot undertaking a night flying test at RAF Church Broughton found himself in difficulties. Wellington III BK508 took off from Church Broughton on a NFT on a crosswind approach at 900feet and was preparing to land when the starboard engine failed. The pilot Sgt F Law was unable to maintain height and force-landed the Wellington which hit a tree and caught fire. Bomb-aimer Sgt Peter White was killed in the accident.

Sgt White had been trapped in the fuselage of the burning Wellington and there was speculation at the time that that he had been running up and down the interior trying to find a way out. The main access into/out of the Wellington was via a hatch below the bomb-aimer’s position in the underside of the aircraft’s nose. It is presumed that the pilot and other crew members had been able to escape through the top of the cockpit glazing.

Ives is thought to have witnessed the incident as Geoff Yates (Jim’s B/A) recalls that Jimmie was particularly cut-up about the accident. It is thought that Jim had been aware that Law was in the air and would have been re-acquainting himself with a familiar face when Law landed. It had been apparent that although Sgt Law was in difficulties he had not been given a priority landing. Geoff Yates distinctly recalls Jimmie saying that ‘they murdered him’ (Sgt White) by not allowing Law to land immediately. There is no available record of the names of other personnel making up Law’s crew at 27OTU.

RAF Wymeswold at the end of June 1943. Having completed a four week duty there Law and crew were posted initially to 1656CU at RAF Lindholme on 23rd July and moved on five days later to 1662CU at RAF Blyton to convert to four-engine heavy bombers. At CU the original five-man crew would have been augmented by a flight engineer and another air-gunner – Sgt Stocks (f/e) and possibly Sgt Plampton (m/u).

On 29th August, while at RAF Blyton Sgt Law and his crew accompanied Ives and Sgt Yates (or vice versa!) on a Mk XIV bombing exercise, both pilots at the controls for an hour each. 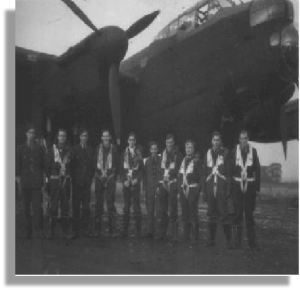 Frank Law (fifth from left), crew and ground crew – date unknown (the uniform of the crewman extreme right appears slightly darker than his colleagues – suggesting RAAF, so may be F/Sgt Thomas Kay?

After conversion to heavy bombers Frank Law was posted to 103 Squadron where he experienced a number of crew changes:-

F/Sgt Thomas Leslie Hobson Kay RAAF (bomb-aimer) and Sgt Cyril Walter Plampton (a/g) died flying with F/Sgt Val Richter on ‘Black Thursday’ 16th/17th December 1943. Both men had been called upon to make up a ‘scratch’ crew from 103 and 576 Squadron personnel. Richter’s aircraft was involved in a collision with the 576 Squadron Lancaster of F/Sgt Frederick Scott RAAF as both aircraft were climbing-out from Elsham Wolds after take-off.

Law’s original navigator Sgt Mackay dropped out after four operations, for the last two he had apparently suffered sickness during the flights. To his credit Sgt Mackay resumed operations with 101 Squadron but lost his life on operations in February 1945.

Whilst the Ives crew had suffered their own set-backs during their early days at RAF Kelstern with two early returns out of four starts, W/O M J Graham was having similar experiences at 103 Squadron:-

18th Nov 43 Berlin Did not take off. Reason unspecified.

Sgt Ken Flowers joined W/O Graham’s crew list for the Berlin sortie on 22nd November 1943 when Graham experienced another early return with an unserviceable engine.

The following evening a squadron aircraft swung on take-off and blocked the runway, all further take-offs were ‘scrubbed’, including W/O Graham.

A problem with the air speed indicator led to Graham returning early from the next Berlin operation on 26th November. W/O Graham’s crew were then transferred to 103 ‘s sister squadron 576. Having completed the operation against Berlin on 2nd December, the crew were involved in another abortive sortie the following night, suffering another engine failure. After this date W/O Graham disappeared from 576 Squadron.

When flight engineer Donald Bell arrived at Elsham Wolds in early December he flew with P/O Len Young’s crew on operations from 16/17th December until he too joined F/Sgt Law’s crew for the Berlin sortie on 20th/21st January.

Leipzig. The crew of Lancaster ND408 PM-T was:-

ND408 took off from Elsham Wolds at 23.25 and was one of four 103 Squadron Lancasters which did not return, one of a bomber force of 823 aircraft detailed of which 78 aircraft were lost.

Initial reports from the German Authorities Totenliste 204] coming to the squadron via the International Red Cross Committee outlined that a squadron aircraft had been shot down on 20th February 1944. Three members of the crew were named together with two unknowns who had been buried on 21st 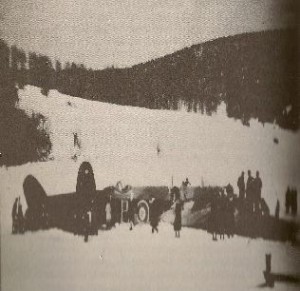 Peter Hinchliffe’s book ‘The Other Battle’ includes a photograph of a 103 Squadron Lancaster after it was shot down. The caption reads:- ‘German civilians inspect a Lancaster shot down about 15kilometres south of Paderborn during the night of 19-20 February 1944, when the target was Leipzig, one of seventy-eight bombers that failed to return that night. It is almost certainly PM-T of No.103 Squadron’.

In December 1947 investigations by No. 24 Section, No. 4 Missing Research and Enquiry Unit RAF (Germany) revealed the circumstances of the loss of ND408. It transpired that at approximately 06.00hrs on 20th February 1944 a RAF Lancaster crashed in a field just south of the village of Atteln.

The aircraft had apparently been hit by flak which had damaged its tail and adversely affected the steering. The aircraft had not burnt and the bodies of five airmen were recovered.

Two of the crew had parachuted safely from the aircraft and been taken prisoner. Those who died were buried in the village cemetery.

It is conceivable that the crew had been trying to navigate home but knowing they had no chance of reaching the UK were searching for a suitable spot to crash-land. The two members of crew who baled-out successfully were Sgts Bell and Baldwin. It is understood that Sgt Bell’s wife Joan had a few days earlier given birth to their second son – surely a reason for his captain to urge him to evacuate the aircraft. 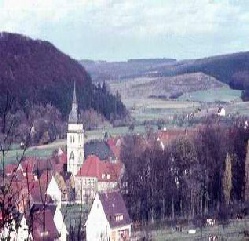 The bodies of the five crewmen were exhumed from the village cemetery and reverently re-buried in the Hanover (Limmer) British Military Cemetery in accordance with agreed policy. The policy of reburials had been agreed upon by His Majesty’s and the Commonwealth Governments as it was felt that the fallen should rest together in special military cemeteries, regarded as being on British soil which would be tended by The Commonwealth War Graves Commission in perpetuity, rather than remaining in isolated cemeteries dotted around Europe.

It seems that Frank Law’s commission to P/O (171852) status had been approved just before his death, the promotion was gazetted on 17th March 1944, effective from 13th February 1944.

Tragically for the family Frank Law’s elder brother John, who also held a commission in the RAF was killed in the Far East on the day before ‘VJ-Day’ on a shipping strike with 203Squadron. A few days beforehand F/O Law had been awarded the DFC for his brave and devoted service with the squadron.

Flight engineer Donald Bell passed away in December 2013.  A different version of the loss of ND403 has now come to light from Donald Bell’s family.  It transpires that four members of the crew had been killed instantly when ND408 was hit by fire from a night-fighter on the way in to the target. ‘The Lancaster limped on (on) fire and barely under control. The bravest man we will never know – Frank Law, a Scot, ordered any surviving crew to “get out” as he fought and held the crippled Lancaster level so Don and the bomb-aimer (Cecil Baldwin) could parachute to safety, then he rode it into the ground.’