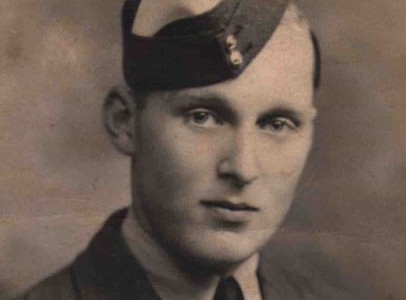 WW2 RAF Bomber Command – split crews and ‘spare bods’.
Trying to unravel the lives and experiences of WW2 bomber aircrew can be a challenge. Cousin Jim’s crew was split-up a few weeks after becoming operational at RAF Kelstern. Jimmie Ives was posted to 626 Squadron, Don Bell and James Goodrick to 103 Squadron, Bill Allan went to 166 and Geoff Yates, Bill Hay and Davey Johnson, an air-gunner who had already served a tour of ops in the Middle East, each stayed with 625 to join other crews headed by Donald Blackmore, Robert Etchells and Roy Gallop respectively.

Bell, Goodrick, Yates and Hay survived the war – Ives and Johnson died within minutes of each other flying with different squadrons on 30th January 1944, Allan perished on the infamous Nuremberg raid at the end of March – their fate.

Another pilot suffering the trials and tribulations of losing his crew was (briefly) a contemporary of Jim Ives at 625 Squadron, but at the beginning of November 1943 he had been returned to conversion training. The squadron ORB records that having arrived from 1667 CU with his crew on 23rd October 1943 F/Sgt Valentine Richter was posted out again on 4th November to 1662 CU, minus his crew. In this short space of time what had happened to prompt this reversal – perhaps a mishap on a local flying exercise? But what happened to his crew?

By a process of elimination from early postings out from the new squadron it seems that three airmen can be identified as being from Richter’s crew:- Sgt Frederick Glen – f/eng, W/O Bernard Salt – w/op, (both to RAF Wickenby), Sgt Neville Rawlinson – a/g (to RAF Kirmington) were posted away in the first week of November without apparently having flown an operation from there.

The service record of navigator F/Sgt Ken Flowers (who would later fly in P/O Frank Law’s 103 Squadron crew) shows that he was posted from 1667CU to 625 Sqn on 23rd October 1943 which places him as a member of either F/O T Nicholls’ crew, Sgt R Etchells’ crew, or that of F/Sgt V Richter. Squadron ORBs record that Nicholls and Etchells stayed at Kelstern, their navs being Sgt P R Bealby and Sgt E Williams respectively. It is therefore a distinct possibility that Ken Flowers came to the squadron as Val Richter’s navigator.

The squadron’s summary of events for November does not include Ken’s posting out from 625 Squadron to 103 on 2nd November, but his service record does – coinciding with the postings out of Sgts Glen and Rawlinson.

Sgt Glen’s is a familiar name from Jim Ives’s short stay at RAF Wickenby – Frederick Glen completed a tour of operations in the crew of F/Lt A J H Wright (626 Squadron). I understand that Sgt Glen’s logbook verifies though that he had been a member of the Richter crew. 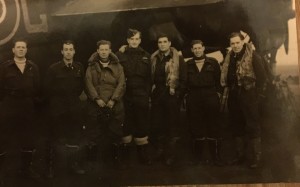 Wireless operator W/O Bernard Salt flew in the 12 Squadron crew of F/Lt Alistair J Cook, lost on the Nuremberg raid of 30th March 1944

Sgt Rawlinson was killed on 25th May 1944 when Lancaster ND816 of 582 Squadron, captain F/Lt Stuart Little DFC, was shot down by flak over Aachen. Neville Rawlinson had been posted to 166 Squadron, first flying operationally with Little’s crew on 26th November 1943. F/O Little (as he was then) transferred to 156 (Pathfinders) Squadron on 1st December, the crew flying their first operation from RAF Warboys on 16th December 1943 (Berlin). The crew was with ‘C’ flight when it combined with ‘C’ Flight of 7 Squadron to become 582 Squadron at RAF Little Staughton on 1st April 1944.

Ken Flowers joined W/O M J Graham’s crew at RAF Elsham Wolds. Graham had not flown operations since 4th/5th October following an early return with navigator Sgt W J Condick suffering from sickness. A sortie on 18th/19th November was cancelled and on 22nd/23rd November – Berlin – W/O Graham suffered another early return – ‘port inner u/s’ – the crew on this occasion was:- 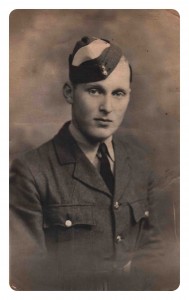 Ken Flowers (many thanks to Howard for the photo)

On 22nd October, 625 Squadron pilot P/O Spark’s r/g Sgt R Whittaker had been badly wounded over Kassel when the fuselage of R5702 was hit by incendiaries from an aircraft above. For the operation against Modane on 10th November 1260028 F/Sgt H J Watkins replaced Sgt Whittaker in Spark’s rear turret – F/Sgt Watkins had not previously appeared on the Battle Order and is not mentioned in the ORB as having been posted in on his own.

Spark’s crew were lost on 29th January Berlin operation, by which time Herbert John Watkins had been both commissioned – P/O effective 3rd December 1943 and awarded the DFC (award wef 27th January) albeit posthumous – gaz 1st June 1945. Given his seniority it is possible that F/Sgt Watkins was embarking on his second tour of ops – had he also arrived on the squadron with F/Sgt Val Richter’s crew? Just as second tour man W/O Davey Johnson was retained on the squadron when the Ives crew was dismantled, perhaps such a valuable commodity as an experienced a/g would not readily be given away.

F/Sgt N R Lossee flew as second bomb-aimer with W/O Aslett’s crew on 3rd/4th November operation to Dusseldorf, apparently his only appearance in the 625 ORBs – an unusual surname outside the USA (or misspelt in the record, perhaps) – he seems to have survived the war. He too appears to have been a ‘spare’ – so could also be a possible for Richter’s crew?

So – my best guess for the Richter crew who passed from 1667 CU to RAF Kelstern is:

Was splitting up a crew an acknowledgement that they were not quite ready for operations, a punishment for poor performance, a lesson to others against early returns or purely an expedient for generating enough ‘spare bods’ to keep as many aircraft and crews serviceable as possible? In all probability it was a combination of all these factors as a regular supply of stand-ins appears to have been necessary to maintain the serviceability of a squadron.

Richter would tragically be involved in the mid-air collision on ‘Black Thursday’ which resulted in the deaths of 14 aircrew, decimating not just two crews, but a third as well – two airmen were from Frank Law’s crew – of which there is more to come subsequently.

If you can tell me anything about any of the personnel mentioned, please get in touch.