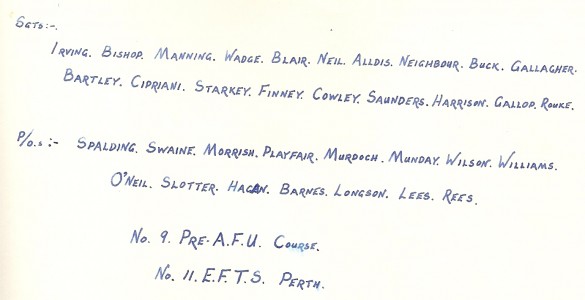 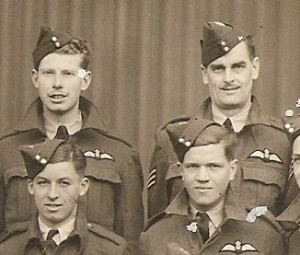 This calls for some ‘bad’ history on my part – conjecture, educated guessing – in the hope that someone who knows for certain will comment.

Assuming that Sgt Buck came to operations with Bomber Command it is likely he embarked on ops at the back end of 1943 as did his colleagues, already identified.

1399457 Sgt John Anthony Buck died on the Kassel operation of 20th/21st October 1943 flying as second pilot with W/O B E E Allden in Halifax LW301 of 78 Squadron. W/O Allden, Sgt Buck and a/g Sgt G A Nelson were killed, the remaining crewmen survived to become prisoners of war. Theo Boiten suggests that W301 was shot down by Oblt Gustav Tham of 11./NJG5 while a website detailing Gunter Radusch’s career credits him with the abschuss. John Buck was only twenty years of age when he died (six months or so after this pre-AFU photo was taken) – Sgt Buck looks a good ten years older, I feel.

Just over a month after John Buck’s demise another pilot with the same surname lost his life flying for Bomber Command. 1378810 F/Sgt Robert Moscrop Buck of 428 (RCAF) Squadron, had all but completed a sortie to Stuttgart and back when, making his approach to land, his Halifax was in collision with a Lancaster.

The planning for the main attack on Berlin required a diversionary raid on Stuttgart which was undertaken by 157 Halifaxes and 21 Lancasters which split off from the main force when the bomber-stream approached Frankfurt.

‘Sgt Gay flew an aircraft to Topcliffe to have tail assembly changed.’

‘After much scrambling and ‘bags of flap’ eleven aircraft were detailed for attack on Stuttgart.’

‘F/Sgt Buck and crew were killed as a result of an air collision with a Lancaster diverted to this Station.’

‘F/Sgt Buck had permission to land and was at a height of approximately 200 feet when the Lancaster (which did not have permission) also tried to land, colliding with our aircraft. Both crashed and burned.’

F/Sgt Buck had narrowly missed a collision over the target just after bombing Dusseldorf on the night of 3rd/4th November, his previous operation. Having bombed a concentration of green T.i.s at 19.24 hrs from 20,000 feet – ‘While camera was operating it was necessary to do a violent climb to avoid a four engined aircraft, approaching from starboard on a heading of approximately 300 degrees.’

‘On return to aerodrome this aircraft collided with a Lancaster and as far as is known no Interrogation can possibly be made. It has been presumed that the Primary target was attacked. All members of the crew were killed.’

The Lancaster was ED417 of 103 Squadron, pilot F/O Robert Brevitt and the incident was briefly alluded to in connection with F/Sgt Val Richter’s penultimate sortie. The 103 Squadron ORB noted that on return F/O Brevitt and all his crew were killed, with the exception of mid-upper gunner Sgt Bowyer, who was seriously injured, when their aircraft collided with a Halifax while approaching to land. ‘This was shockingly bad luck as they had obviously done the distance and were back with the main stream.’

Robert Moscrop Buck was born in 1913 in Northumberland, the second of five siblings, Margaret, Robert, George (after their father), Frederick and Mary – as was the fashion of the time Robert had received his mother Eleanor’s maiden surname Moscrop as his middle name. Robert married Anne H Geddes in late 1939 and the couple appear to have had two sons, Douglas, born in 1940 and Alastair 1943. At the time of Robert’s death Anne was living about fifteen miles away from Middleton St George at Brompton-on-Swale.

F/Sgt Robert M Buck was buried in Harrogate (Stonefall) Cemetery, he is commemorated on Whittingham War Memorial, Northumberland. The 1939-45 Book of Remembrance for Duke’s School, Alnwick has the following entry (which I hope they will not mind me reproducing here, apologies):-

I have not yet been able to trace details of the crash in which he was seriously injured. However, it may have been during the early stages of his pilot training – which could have delayed him sufficiently (resuming training July 1942 onwards) for him to have found himself at 9 pre-AFU in February 1943. Roy Gallop had graduated from Arnold Scheme class 42J in November 1942.

The Sgt Buck in the photograph certainly looks to be nearer thirty than twenty years old. My best guess is that the gentleman beside Stanley Neighbour may well be Robert Moscrop Buck.

Robert’s headstone includes the inscription – ‘In God’s keeping, till we meet again’.

In the interests of completeness other possibles for Sgt Buck are:-

1375762 W/O George Field Buck was a pilot with 607 Squadron killed in action 29th December 1944, presumed to have qualified to fly single-engine aircraft, 607 Squadron were operating Spitfires in the Far East.