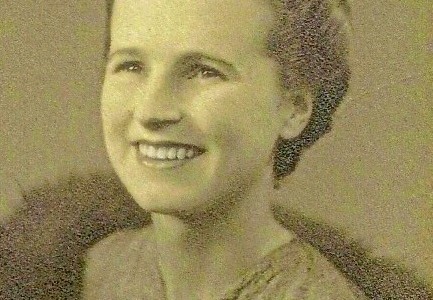 In researching the various people mentioned in these pages their personal stories are rarely as expected. One of the names on the Southall County School Memorial board – Joan Fieldgate – posed some problems in tracing what had happened to them. Joan had no CWGC entry as a civilian casualty nor did she appear to have served in the armed forces.
Much of the information I have found in researching cousin Jim’s story has been of the ‘well, I never knew that!’ variety – Joan’s story falls into that category. Joan had been just as much the adventurer as any of the other ex-pupils of Southall County School who became casualties of the Second World War – a volunteer for the Children’s Overseas Reception Board. She died in hospital at Ravensburg,Germany on 9th October 1941, aged 27 years. 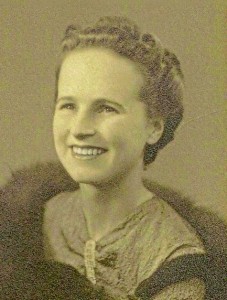 Evacuation Escort Dies In Germany
LONDON, Nov. 2.—AAP.
The death has occurred in Germany of a children’s overseas evacuation escort. Miss Joan Fieldgate, who was taken prisoner while returning from Australia. The ship in which she was travelling was torpedoed. She spent many months in an internment camp, where she became ill. She was taken to hospital at Ravensburg. Her (step-) mother, living in Middlesex, said that letters from her daughter revealed that she had suffered hardships after the torpedoing, but was fairly comfortable in Germany. Her daughter mentioned that she had received hundreds of letters from friends made in Adelaide and elsewhere in Australia.’
Joan Louise Fieldgate was born in Gillingham in July 1914, her father worked as an electrician at Chatham Dockyard, mother died shortly after Joan’s brother Ivan’s birth in August 1918.
Their father worked abroad in Hong Kong between 1920 and 1924 leaving Joan in the care of her father’s parents and Ivan with their mother’s family. Father subsequently remarried and the family was reunited back in Gillingham. Several work moves eventually took the family to West Drayton with Joan attending Southall County School from 1926, progressing to a student teacher position at the County School between 1931 and 1932.
In the autumn of 1932 Joan attended the Avery Hill Teacher Training College, Eltham, graduating with a teaching diploma in 1934 and obtaining a post as an art teacher at an elementary school in Hillingdon. At the outbreak of the Second World War Joan volunteered as an escort to take evacuee children for the Children’s Overseas Reception Board from England to Australia.
Joan was skilled in making clothes and very interested in fashion. On her initial escort voyage in the ‘Nestor’ she enjoyed a long layover visit in Cape Town where she made contacts in local fashion houses with a view to possible future employment.
Having safely delivered their charges in Australia the escorts were due to sail an easterly route to the south of Chile, thence north to cross the Atlantic, However, Joan intended to follow-up her fashion leads in Cape Town and embarked on the ‘Port of Wellington’, a cargo vessel making a westerly voyage. Ten days out the ’Port of Wellington’ was attacked by ’the Pinguin’, a German commerce raider, accompanied by the ‘Storstad’, a tanker accommodating prisoners which received crew and passengers from the ‘Port of Wellington’ including Joan Fieldgate. While on board the ‘Storstad’ Joan contracted tropical dysentery as a result of the poor living conditions.
The ‘Storstad’ returned to Bordeaux from where the prisoners were taken to Southern Germany, reaching Liebenau in mid-March 1941. By September Joan was very ill and was admitted to a hospital at Ravensburg where she died on 9th October 1941. She was buried in an unmarked grave. A few months later there was an exchange of prisoners and the remainder of Joan’s group returned home.
Liebenau had before the war been been an asylum for Germans adults and children with mental and physical disabilities. In October 1940 Liebenau was designated by Heinrich Himmler as an internment camp for civilian women and children of countries with whom Germany was at war – many of whom were British passport holders. From this point numerous of the asylum inmates were euthanised to make way for internees whom, it was hoped, may have future ‘bargaining’ potential.
‘The Accidental Captives: The Story of Seven Women Alone in Nazi Germany’
by Carolyn Gossage – includes a brief account of the sad demise of ‘Julie’ – ‘a British escort for a group of English refugee children being evacuated to Australia. …..she arrived at Liebenau in April 1941, but was taken ill shortly after her arrival, and was then misdiagnosed. Before the error could be rectified ….her patient’s case of dysentery had reached the point of no return and within six months Julie was pronounced dead. News of her death quickly spread through the camp and with it the realisation that Julie was, in fact, a peripheral victim of the war from which the women of Liebenau felt relatively removed and isolated.’
Another book – ‘Who Will Take Our Children?: The British Evacuation Program of World War II ‘ by Carlton Jackson – also includes references to Joan’s demise.
Joan Louise Fieldgate is commemorated by an inscription on her mother Louise’s gravestone in Gillingham (Woodlands) Cemetery, Kent, England.
Sincere thanks to Joan’s brother Ivan for telling me about his vivacious elder sister.