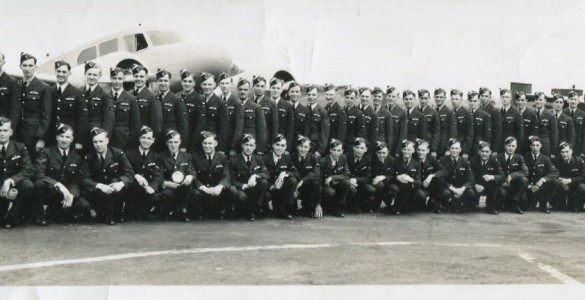 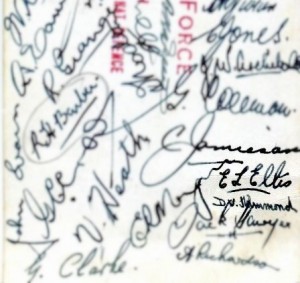 Thanks to Wayne for Roy Fennell’s advanced pilots’ course graduation photograph. Signatures of other graduates are on the reverse. Can anyone put any names to faces please? To start the ball rolling – the signature E S(?) Ellis – could this be Edward Sydney Ellis who would be awarded the CGM and DFC flying with 625 Squadron during the winter of 1943/44, the following spring and early summer?

Ted Ellis nicely links two other pilots who are significant to recent research. Sgt Bill Allan RAAF went on to fly with 166 Squadron pilot F/Sgt Fennell’s crew at RAF Kirmington – Ted Ellis now appears to have been a contemporary of Fennell’s at RCAF Brandon. He also figured as the experienced pilot with whom Sgt Roy Gallop and crew flew their ‘second dickie’ trip at RAF Kelstern. W/O Davey Johnson later became a regular in Gallop’s crew. Just as Fennell’s early operational experience had been eventful so too was Gallop’s first op on the evening of 2nd December 1943 (two days before cousin Jim was posted out from RAF Kelstern):-

Acting W/O Edward Sydney Ellis and crew had been among the first contingent to arrive at RAF Kelstern on 13th October 1943 having been posted in from 12 Squadron where Ellis had already completed nine operations. Other crews arriving from RAF Wickenby were those of pilots P/O Cyril Kroemer (with whom Sgt Ives would undertake his initial op as second pilot) and F/Sgt Harold Gumbrell.

Target bombed at 20.22 from height of 20,000ft. Several fires were seen. Flak damage on bombing run and after this, enemy fighter shot-up mid-upper and rear turrets, both gunners being wounded. Aircraft landed at Bardney. No flaps, no tyres, no R/T, no W/T, no fuel. Excellent crew co-operation all round in emergency. Both gunners taken to Rauceby Hospital.

2/12/43: ‘Weather Day – Cloudy, with continuous slight rain becoming fine in afternoon, visibility moderate to poor. Night, fine with poor visibility, wind S/SE , becoming S/SW/W 5-10 miles per hour. Training flying, nil. Operations. 15 aircraft were detailed for operations, the target being Berlin. Of these aircraft 12 successfully attacked target in conditions varying from 8/10ths, thin cloud to an almost clear sky. A number of enemy fighters were sighted and two JU88 planes damaged. Aircraft A/625 and D/625 abandoned tasks owing to engine trouble. A large area of fires was left behind after this raid.

The captain and pilot of aircraft B/625, W/O Ellis was initiating a new crew on their first operational sortie. During the initial bombing run, his aircraft was hit in the rear turret by heavy flak, injuring the r/ gunner Sgt Wightman D G, and rendering the turret unserviceable. The bombing run was continued and the bombs were released in a long stick. An enemy fighter then attacked from below raking the aircraft from stem to stern, the rear gunner being further wounded and the M/U gunner Sgt Jones W G also being wounded. The bombing run was continued, the delay between the high explosive and incendiary bombs being carefully timed, and although the fighter put in another long burst during this time, the bombing run was made exactly as briefed. It was only after the bombs had been accurately aimed at the target that W/O ELLIS took evasive action which lost the enemy fighter. After leaving the target area it was found that the intercom was unserviceable, bomb doors could not be closed, turrets were unserviceable and the main plane and fuselage were damaged, all of which affected the handling of the aircraft considerably. Height was lost to 10/12,000 ft. on the route home and just before crossing the DUTCH coast the aircraft was once again hit by flak. As fuel was short a landing was made at Bardney, using the emergency method of lowering the undercarriage,without flaps and on flat tyres. The aircraft nosed over on landing but tipped back again and no further injuries were sustained by the crew. Both gunners were taken to RAF Station Hospital RAUCEBY. For his complete disregard of enemy opposition, his skill and superb captaincy and airmanship, pursuing his task to the end in face of intense fire, and having done so, bringing his damaged aircraft home safely W/O Ellis was recommended for, and awarded the Conspicuous Gallantry Medal.’
Citation for Conspicuous Gallantry Medal – Acting Warrant Officer Edward Sydney ELLIS (1292427), Royal Air Force Volunteer Reserve, No. 625 Squadron:-
‘One night in December, 1943, Warrant Officer Ellis was the pilot of an aircraft detailed to attack Berlin. During the initial bombing run the aircraft was hit by anti-aircraft fire, which injured the rear gunner and rendered his turret unserviceable. Warrant Officer Ellis maintained a steady run, however, and made his first attack. Just as the first bombs had been released the aircraft was raked by bullets from a fighter and the rear gunner sustained a further injury; the mid-upper gunner was also wounded. Although the enemy delivered another long burst of fire, Warrant Officer Ellis continued his run and attacked the target exactly as planned. On leaving the target area it was discovered that much damage had been sustained. The intercommunication and hydraulic systems and the turrets were all unserviceable. The mainplane and the fuselage had been damaged, while the bomb doors could not be closed. In spite of this, Warrant Officer Ellis flew on and eventually reached an air field in this country, landing his aircraft safely without the aid of flaps and in spite of punctured tyres. In harassing circumstances, this pilot displayed skill, courage and devotion to duty beyond praise.
(London Gazette – 24 December 1943)

‘2-12-43 Lancaster III Berlin – Ted and I took a sprog crew for first op. Attacked by fighters over target on bombing run. Both gunners badly injured. Navigational aids shot away. Crashed on landing. Great welcome back at squadron, felt a hero. (Distinguished Flying Medal awarded for this mission – at Palace).’ – Sgt A G Boud

Apologies to Arthur Boud’s nephew Steve Bell for lifting the navigator’s comments from another forum site – I would be very grateful if Steve could contact me as I have been looking at Ellis’s crew in a bit more detail and I’d like to compare notes please. 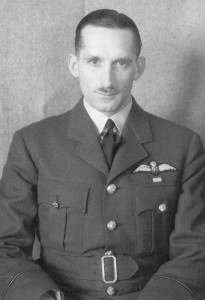 Thanks to Pat for this image of P/O (later F/Lt) Edward Sydney Ellis CGM, a suitably serious looking fellow.