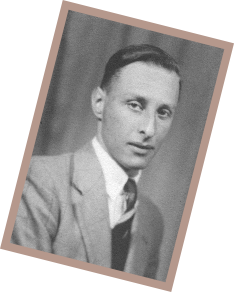 This page is dedicated in honour of Cecil Henry Gardener

Cecil left school in the summer of 1939 having passed the General Schools’ Certificate with exemption from matriculation. Initially after leaving school Cecil worked in his mother’s café for a short time until he secured a clerical job with Gaumont British Films, in Wardour Street.  After  three weeks in the film business Cecil left as he disliked the job.

He then went to work for C & E Morton, Food Processors and Exporters in Fenchurch Street as a shipping clerk. The London Blitz curtailed this employment when the firm’s premises were gutted by fire one night in 1940.

At that time the Home Office was taking on temporary clerical officers at London Civil Defence Regional Headquarters (Home Office) in its main office at the Geological Museum, Exhibition Road, Kensington which had further offices in a requisitioned block of luxury flats opposite. Cecil worked in a department dealing with Steel and Timber Control Licensing for air-raid shelters.

LCDRHQ’s emergency control room was permanently manned by a small nucleus of staff, augmented by clerical officers from other departments during air raid alerts. In 1941 Cecil started working shifts in the control room which brought him into contact with Jim Ives, Lilian Noble and others.

Cecil suffered a badly broken leg playing for the LCDRHQ football team against Kensington Rescue Service at Wormwood Scrubs in February 1942,  He spent six months in Hammersmith Hospital suffering a succession of infections and undergoing various treatments.  The injury rendered him unfit for military service but he served with the Home Guard unit attached to LCDRHQ.  In late 1943 following a bout of bronchitis Cecil was diagnosed with pulmonary tuberculosis and was admitted to Clare Hall Sanatorium, South Mimms, Middlesex – the reference to ‘visiting sick friends and getting lost’ in Jimmie’s last letter to Lilian presumably alluded to Cecil and the Clare Hall Sanatorium.

Despite a V2 rocket hitting the Gardener family home, some of the correspondence received by Cecil from his workmates survived to the present day.  Cecil was discharged from the Sanatorium in December 1944 and was passed fit for work in June 1945.  He became a temporary clerk with the Ministry of Pensions, dealing with pensions and allowances for disabled servicemen and merchant seamen.

Cecil went on to pass the Clerical Officers Open Reconstruction Examination and in November 1946 was posted to the Ministry of Works, based in Gracechurch Street. He remained with Ministry of Works until retirement in July 1983 apart for a brief period between 1961 and 1963 when the work he was doing was taken over by the War Department. Cecil worked in various locations including Fort Halstead, Knockholt, Kent; Colchester and London.

Cecil was married on 16th June 1951 at Chelsfield, Kent followed by a honeymoon in Lynton, Devon. Cecil and his bride made their home in Kent where they lived until shortly before Cecil’s death in 2008.