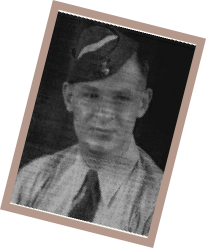 This page is dedicated in honour of Sgt – John Minty (Jock)

John jnr was born in 1922 and shared time during his formative years between the jungle environment of the Yucatan peninsular and the contrasting climate of Aberdeen. In 1938 John and his three siblings made a return sea-voyage from British Honduras to London on SS Jamaica Producer, destined for 18 Ashley Park, South Aberdeen.

John Minty was accepted for RAF aircrew training and was assessed as being suited to pilot/ observer duties.

In common with Jimmy Ives and so many others ‘Jock’ Minty’s training began in 1941 at ‘Arsey Tarsey’ –  ACRC Lords Cricket Ground, St John’s Wood, London, progressing to Paignton Devon for Initial Training Wing ‘square-bashing’ training (ITW).  It is assumed that LAC Minty did not show the necessary aptitude as a pilot at EFTS as he passed through Gourock, Scotland as a nav u/t,  sailing to Moncton, Canada, thence to Miami for 3months training (May 18th 1942).  Minty’s homeward route was via New York and the troopship ‘Queen Mary’ (August 26th).

Sgt John Minty’s navigation training was furthered at RAF Wigtown, Scotland (Oct 10th) where he experienced flying in Avro Anson trainers.  In spring 1943 Sgt Minty found himself at 30OTU where the ‘crewing-up’ procedure threw him together with Jimmie Ives and Geoff Yates – common experiences shared with Ives of training in Florida and the ‘Queen Mary’ return voyage at the end of August surely played a part in their association.

Geoff Yates recalls that Minty became unsettled during their time at Operational Training Unit but did not know why, nor of the circumstances of Minty’s sudden disappearance from the crew.

The reason for ‘Jock’s’ disappearance stemmed from his father John Minty Snr taking on a role as Controller of Imports for the Government of British Honduras.  In order to avoid a conflict of interests this required John Ross Minty Jnr to take charge of the family business out in British Honduras. ‘Jock’ Minty accordingly had to apply to be discharged from the RAF whereupon he was reduced in rank and posted ‘to bomb dump’ to 93MU RAF Norton Disney near Swinderby, Lincolnshire. 93MU was responsible for supplying bombs, ammunition and oxygen to RAF Waddington and RAF Scampton.  His discharge was effective from October 13th 1943.

John Minty Snr died in Feb 1945.  Despite dutifully doing so, running the timber exporting business had not been one of John’s ambitions, he was keen on art and was an inveterate sketcher. It is thought highly likely that the pen and ink caricature of Sgt J K Ives – ‘Ginger’ was the work of budding artist Sgt J R Mint 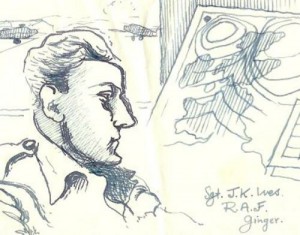 When the war ended John Minty handed over the running of the business to his younger brother Allen who had served in the Royal Navy.  John pursued his interest in art, studying in Europe and in the USA in New Orleans and New York City where he met author and artist Henry Miller, who reputedly borrowed Minty’s leather jacket and did not return it.

Apparently the family still retain a note from Miller which reads – “Yes, I will return your leather jacket the next time I see you.”

John Minty moved to Boston, Massachusetts, but became involved in a building restoration project in Concord where he met and married local girl Molly Ingham and there they settled to raise their family. John worked for the most part as a commercial artist and technical writer, also editing a newspaper for the Raytheon Company for many years.  Raytheon had been instrumental in producing the magnetron during the war, a major component in radar receivers, including the H2S air-to-ground navigation scanners used by Bomber Command.  After the war Raytheon developed the microwave oven and continued with armaments development and enjoyed major involvement in the Apollo 11 moon landing.

Throughout his working life John Minty remained passionate about his painting – his love was always art.